OK. Four pictures of Not Cat. I want to include one in a calendar for Aunt at Christmas. Which one should it be? Some cropping may be involved. 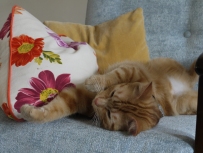 What do you think? Which one should I include?

I am thinking of six pictures of Cat. Aunt was a big fan, called him exceptional, and always made a point of telling me what a special cat he was. And six pictures of Not Cat. Aunt became one of his first fans, and the regard is mutual.

So the Sunshine picture of Cat would be this one:

But now, having received one disturbing and two bloody annoying emails, I’m going to pour a large glass of red wine and concentrate my mind on the fab lecture I’ve just been to. Cheers!