Back in the City today and as I had my camera handy, I took these pictures.
There is always a huge amount of building going on in the Square Mile, as property owners compete for the best offices to let at huge rents.
The current trend is for very tall buildings with names such as the Pinnacle and the Heron, while just south of the City is the Shard. Sounds like a bit of willy waggling to me: mine’s bigger than yours type of thing.

I have a soft spot for the Lloyd’s building. It’s the most photogenic building I know. Just point a camera at it and the results are at the very least good.

It’s positively geriatric compared to its new neighbour, the Prawn, shown here on the left. 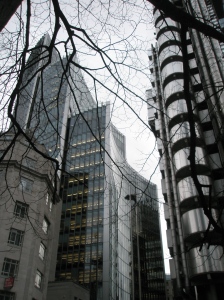 When the IRA bomb destroyed the old Baltic Exchange, we were promised it would be built exactly as it had been. Instead we got the Gherkin

It has quickly become an iconic building on London’s skyline, though it does rather dwarf the nearby church of St Andrew Undershaft which has stood there since Tudor times.

It’s not really a bikers’ church, though it does rather look like it.

Some parts of the City have a completely different feel. The arches that lead to Fenchurch Street railway station mean dry parking for push bikes.

This nearby building has, to me, a feeling of calm, despite being in the shadow of a new plush hotel. 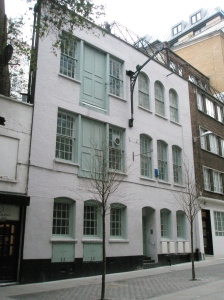 The best thing about French Ordinary Court, where there was a cafe selling fixed price ordinary meals to French protestant refugees, including my ancestors maybe, is its name.

Those of you who remember Glenn Close as Cruella De Ville in the later film version of 101 Dalmations may recognise these wonderful sculptures from outside Minster Court, which appeared as her HQ in the film.

In this instance, minster does not have a church connection, though the building makes me think of a cathedral designed by someone on mescaline. The name comes from combining the two adjoining street names; Mincing Lane and Dunster Court.

18 thoughts on “City of Contrasts”