The traffic was held up by an Orangemen’s march today. It happens every summer. Lots of drums and whistles, and as many union flags as you saw at the Jubilee.

I waited patiently at the bus stop for the traffic to settle. Some middle aged men on Vespas approached. the Vespas had French number plates. After a lull, more Vespas, this time with Italian number plates, then some Belgian ones and some British one. There must be a convention somewhere.

I waited a little less patiently as the wind whipped up and the sky threatened. A stranger approached me and said he did not think the buses were running. It added up. I walked along the Embankment. I was regretting not having a camera with me. A group of cyclists dressed in matching orange lycra were posing for a photograph with the Eye as a back drop.

A swathe of skateboarders came from the direction of Trafalgar Square, weaving round bollards, riding under the Jubilee Bridges. Then they were gone. Several rollerbladers came along the pavement. It seemed that they might be heading to their own event.

On the north side of Waterloo Bridge, a group of young men practised an acrobatic display, using the architecture for props. By the National Theatre the Inside Out season continued. There’s a bar made from props. I took a picture last week. It was built by my friend Jen’s brother.

The climbing figures on the hayward Gallery remind me of the puppets in the stage production of War Horse.

And who could resist this cement mixer? 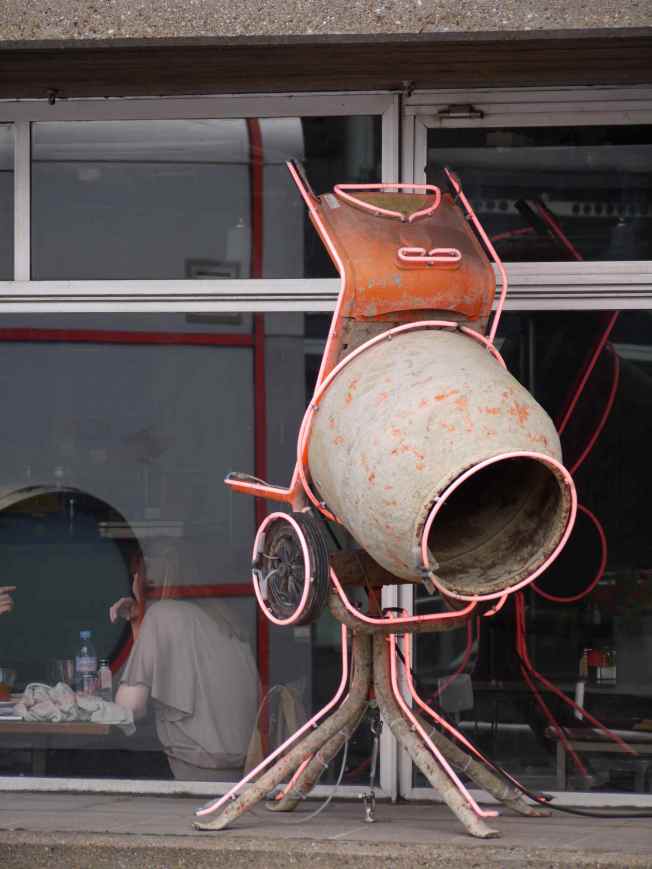 Had the buses been running I’d have gone straight home. As it was, I enjoyed a walk by the river and had another look at what the South Bank has to offer this June. London is an expensive city, but it offers so much to those of us who live here and to visitors. What a brilliant place.

14 thoughts on “London, My London”