I listened to Ken Robinson and others talking this afternoon. Thanks to BBC iplayer I was able to hear a Radio 4 programme that had gone out this morning, In His Element. It was about his role in helping to develop Derry City (stroke city as it is often called, not because of the high incidence of cerebral haemorrhages, but because depending one which side of the political divide you stand it is Derry or Londonderry.
If you’ve not heard of Ken Robinson before, I should tell you he is an educator, an inspiring speaker, ex Professor of Education at Warwick and Ted Wragg’s natural successor. If you’ve not heard of Ted Wragg, you have some wonderful catching up to do. He was a splendid man; warm, witty, fantastically intelligent. When he died several years ago, I cried and felt I had lost a friend.
But I didn’t mean to talk about death. I meant to talk about creativity and where it lies in our lives.
Ken Robinson definitely believes in the power of creativity. There’s a very famous TED talk by him, that I urge you all to listen to. Go on, it’ll improve your lives. I’ll put a link at the end of this, or even insert the video. See how I spoil you. He’s not talking about sticking sequins on a piece of card, which is al too often how creativity seems to be defined these days. It has a far wider scope. A scope that the good people of Derry and the South Bank both understand.
This banner may help.

At the South Bank you can see art improving people’s lives. It is accessible, thought-provoking, fun. All around people are smiling. Whether because they are being given opportunities to learn something new:

And don’t you just love a man who carries a toy rabbit around in his pocket?
Sitting in a garden on top of the Queen Elizabeth Hall:

Commissioning a poem from the poetry takeaway: 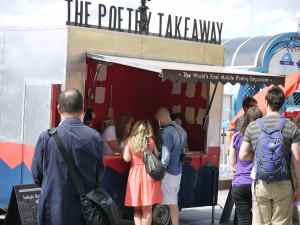 Playing on a rainbow beach:

Or enjoying a beer at a bar made out of props from the National Theatre:

The creative vision that brought all this about awes me. I went to a talk last week by Handsprung, the people who make the horses for Warhorse. There’s an exhibition at the National Theatre about the play and the puppets until September. Creatives themselves, they were lavish in their praise and admiration for the way the National Theatre works; how it explores, takes risks, attempts the impossible. I think that is evident in the vast majority of plays staged there.
Our creative muscles need to be exercised every bit as much as our bodies, with our bodies. We can be creative in any discipline from nuclear physics to embroidery. Whatever creativity is, it isn’t simply about sticking sequins onto a piece of card.
Ken Robinson says it so much better: