My last evening under Derry’s skies for the time being. The weather has been more than kind, and the craic has been good.

There are still a couple of bits of my washing drying on the line, but most things are in the bag. We went for a coffee at the new café at Upperlands and said for hours. If you are in the district do pop in, the coffee is great. There is also a working model of a beetling mill. Cousin, who spent a year working in the office at Clark’s Linen Factory, was saying that orders would come in asking for Upperlands finish, a particularly shiny linen, and the story was that this had come about by accident, with one man falling asleep and letting the linen go through the machine several times. I did take some pictures, but I shan’t download them now until I get home tomorrow night.
I have also discovered the joys of Maud’s ice cream. One large waffle cone probably supplies enough calories to feed an average family for a week. Dangerous stuff. While we ate, mainly in silence, I read the graffiti on the wall opposite; I smell bacon. Any ideas what that might signify?
This evening Cousin has been looking through the box of photographs and family papers and has produced letters from Mother to Uncle Tommy and Aunt Ruth from early in her marriage, letters from Aunt Margaret, and even a telegram Mother and Aunt sent Uncle Tommy and Aunt Ruth on their wedding day in 1940. Interesting reading. Much more interesting than my letter to Cousin’s older sister when I was seven. I am going to boast here though, there was only one spelling mistake. I feel quite proud of my infant self. I should like copies of all if Cousin can scan them.
There was also a copy of the photo of Mother when she was at Forster Green. Cousin has given it to me.i think Nephew will be delighted with it, and a picture of the Big Cat as a kitten with her siblings. Here is a picture of her from the other day,in new bed in the bathroom. 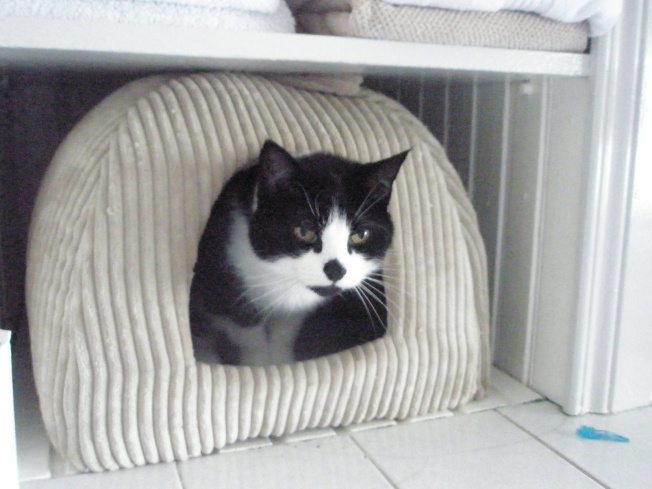 I have had two messages in response to Mother’s obituary in the Guardian from people wanting to know more about Mother. Both are in connection with her nursing career. It seems that she is going to have a little posthumous fame. Again, I think she’d be proud.
I am not sure when I shall next be back in NI, but it’ll be at least a year before I see bees on thistle flowers in the Sperrins.

4 thoughts on “Under Derry’s Skies”