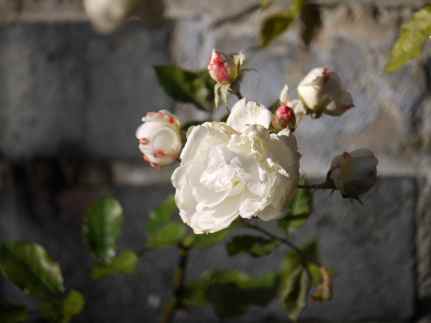 It’s that time of year when after lunch the sun is so low it shines straight into your eyes and you can’t see the faces of people coming towards you.
That’s when there is sun. We had mostly rain from mid afternoon on Friday to mid afternoon yesterday. But today, like last Sunday, had glorious blue skies and lengthening shadows.
Despite the sunshine, MasterB did not want to go out. He took himself back to bed, got very shy when he met the neighbours on the landing, and growled when someone on a lower floor started talking in the communal area.
It was after lunch before he made it into the garden. He so obviously wanted my company that I stayed outside with him, took pictures of the roses, the grapevine and the winter pansies I planted in the hanging baskets last weekend. 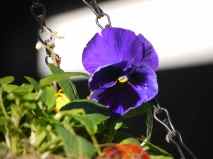 And a couple of pictures of the boy himself which I’ll save for another day.
Later, he was happy enough to stay in the garden on his own, so I was able to go for a walk and photograph the long shadows and notice how these days there are more houses with bikes chained to their railings than without. Boys were playing football in any space large enough, and some that weren’t; dogs were out in force, walking and sniffing, their owners waiting patiently at the end of the lead for the latest newsletter to be thoroughly perused; squirrels bounded up trees and across streets; rooks cawed from high trees.
It still feels like autumn, but the shops have decided it’s Christmas. Jingle Bells played tinnily beside seasonal offers in the supermarket. But the days have still six weeks to get shorter and darker before Christmas is upon us and we are truly in winter.

7 thoughts on “November Roses and other Late Autumn Things”