I am sporting some impressive scratches on my right hand. I have been mauled. That is the best word for it. A lot of cold water flowed over my wounds before they even began to stop bleeding. Then they started again. My dinner companions, who included TBM, a friend made via these WordPress pages, were suitably horrified. No it wasn’t MasterB. How could it be? The students who found him on the street called him polite, and in his use of claws and teeth with me the word is accurate. It is completely inaccurate when it comes to his vocal demands and tantrums which would shame a toddler.
I am feeding Rosie, MasterB’s nemesis, the cat over the wall, while her family is away ski-ing. She’s lovely, a long haired honeybun of a cat who likes a conversation and a cuddle. She does not like her eyedrops. By extension, when I am administering said eyedrops, she doesn’t like me. Her revenge last night was as swift as it was savage. Today I took reinforcements; my friend Celia, wearing her gardening gloves, a towel and a pair of thick gloves I did not put on.
Rosie was delighted to see us both. We fed her, stroked her, sat down so she could join us, and tried to administer her medicine. The moment she realised we wanted to restrain her, she became determined to put space between herself and us.

We managed in the end, and minus visits to A&E, by dint of closing doors and blocking access to the cat flap. She went out through it as soon as her ordeal was over and stared at us balefully.
I went back later, when I came home from a delightful tea party in north London, of which maybe more another time. I was forgiven. She was far more interested in me than her dinner.
I don’t have any pictures of her. I have just emailed her family to ask if it would be alright to photograph her in their home. So maybe later this week.
My own boy has been frivolous, fun and his usual friendly self. He has had a good time sniffing my clothes – my teatime friends own the dog who visits das Boot – and photogenic. This one has to go in next year’s calendar. 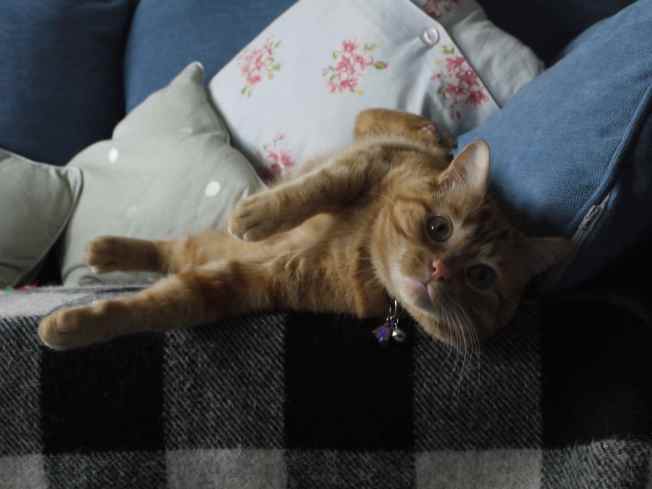 You looking at me?

13 thoughts on “Of Eye Drops, Cats and Mauled Hands”