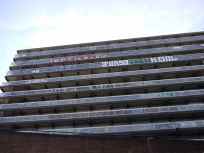 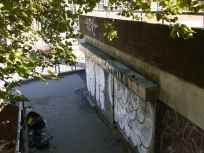 Gilford’s bakery
It could be argued that these buildings, all part of the much maligned Heygate Estate, have not been abandoned in a true sense. The tenants and residents have all been forced to leave as part of the Elephant and Castle regeneration. They are gradually being dismantled, and many of those who lived there feel abandoned. The new buildings will include little or no social housing. People used to living less than two miles from the Palace of Westminster have been relocated to the suburbs. There is talk of social cleansing. The much loved trees from the centre, the secret forest, has been cut down.
It is too early to know if what replaces it will be aesthetically more sympathetic. As the recession has bitten deeper and deeper into the regeneration’s planned budgets the celebrated architects, Richard Rogers and Norman Foster, are no longer associated with it. We are left with architects no one has ever heard of, and Strata, which won the Carbuncle award in 2010, a blot on the skline I see from my windows. Next to it, the Heygate’s brutalist but clean lines seem almost attractive.

A Country Road, A Tree by Jo Baker about Samuel Beckett in France during the Second World War. I don’t know what the reviews were, I found it in the library and having loved Longbourn, borrowed it. I think it’s terrific.
I am absorbed.