I am going to join friends shortly for the annual pancake indulgence that is Shrove Tuesday. I am a bit of a fraud as I am not intending to give up eggs for Lent. Actually, I don’t know that I am going to give anything up. I was thinking of taking something up instead. A good habit, for instance. Something like keeping up to date with paperwork, or not leaving things on the floor. I think that would be harder than giving up alcohol which is my usual Lenten bit of self-denial.
After my ‘phone problems at the weekend, when more than one person suggested it was time I got a new ‘phone, I tried to recall how long I have had my current one, and concluded I must be due for an upgrade shortly. I have had a contract with T-mobile since they called One-2-One, which just about equates with when Eve was a girl. All the same I was a bit surprised to receive a call from them at lunchtime yesterday on the very subject of new ‘phones and contracts. I still lust after an i-Phone which woud speak the same language as my laptop and my i-Pad, but income issues make that a quite ridiculous proposal. The spiffy ‘phones I have seen others using on the bus also fall into that category. So, to cut a long story short, my options seem to be a Samsung Ace 3, a Nokia Lumia 625, or a Sony Xperia SP. I did ask via twitter if anyone had any advice, but no one replied, so I guess there’s probably not a lot to choose between them. At the moment, having had a bit of a play in my local shop at teatime, I am tending towards the Sony, and not only because the staff said it has the best battery.
Today being dry and sunny in parts, I again dried my washing on the line. This, even more than the arrival of Lent and the start of March signals spring. Though the flowers and shoots are a pretty good indication too. 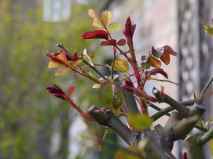 18 thoughts on “Of Pancakes, New ‘Phones, and Washing Dried on the Line”