Yesterday evening, as the end of a pretty perfect day approached, I headed round to Octavia’s where I had been invited, along with Alex, for supper. But before the cooking could commence we had to go to the allotment to see the new pond.
It was a jolly scene; a bevy of allotment folk and associated friends, including Celia, sitting around a table drinking lager. 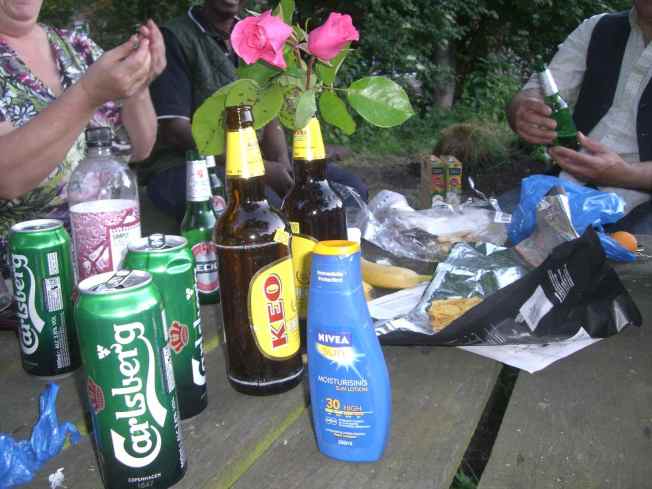 Lager at the Allotment

Freddy and Bonnie the greyhounds were there too. Freddy was more curious than Bonnie and I managed a snap of his noble profile.

We sat down and joined the lager drinking. A hose was filling the pond and Alex noted with satisfaction that there was already at least one insect ready to move in and call it home. Not exactly roses round the door, but someone had supplied some china ducks who perched whitely on the edge. There was discussion about where a proper, ie not plastic, garden gnome with fishing rod could be found to enhance the scene still further.
Never let it be said that we have unsophisticated tastes in SE17.

The Pond Fills Up

Eventually we headed back to Octavia’s and more alcohol. Alex and I sat in the garden while Octavia slaved over a hot stove. It felt pretty good. The day was still warm and balmy, the evening redolent of jasmine at its most heady.

Alex pointed to planets and even found the Plough. I was impressed. The grey ninja was on the prowl. And I don’t think it was the thought of spotting constellations that sent her stalking along the walls. 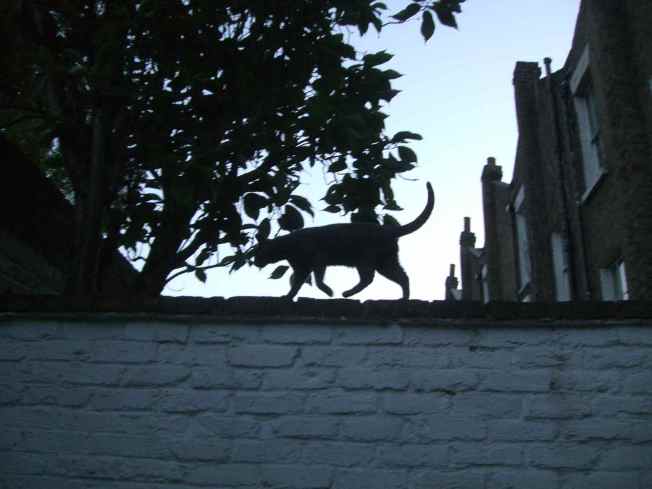 Grey Ninja on a Warm Wall

Supper was delicious, the company congenial, and the journey home short.
Pretty damn perfect all round.

10 thoughts on “Of Ponds, Lager, Allotment Folk and Supper in the Garden”