Snow in abundance on America’s east coast. In London, our brief cold snap has gone and it feels like spring. Celia and I went out for a walk this afternoon. It had been sunny this morning and we softened the butter to have with our lunch of bread and soup on the window sill.

But by the time we went out, the clouds were banking up, so the skies in my pictures from today are grey.

We walked from Waterloo Bridge along the south side of the river, past the National Theatre to Gabriel’s Wharf where a magnificent treehouse was being constructed to promote Virgin Holidays. Apparently it’s only going to be there for a week. 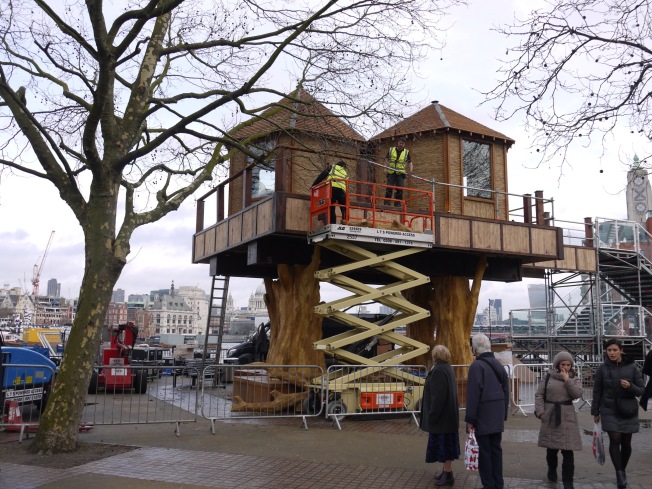 There were lots of people of all ages strolling along by the river, and typically Bankside was very busy. We went into the small but beautifully formed Bankside Gallery and enjoyed the exhibition there. There were several paintings we should each have enjoyed owning, and the shop there is such a temptation with lovely cards and an esoteric selection of books. I photographed one little picture I though Octavia might like. Prior to the Grey Ninja she had two black and white cats.

Under Southwark Bridge there’s an engraving on five slabs of grey slate showing the frost fairs that used to be held in the days when the Thames would freeze. The artist, Richard Kindersley, who has done a number of things locally, seems to like dogs, and they feature quite a bit. Some people seem to think the engraving would be enhanced by their signatures, either scratched into the surface, or written with indelible ink.

We crossed Southwark Bridge to continue our walk along the north bank. The Shard always looks beautiful.

And increasingly the City is encouraging birds to make their homes within its boundaries. 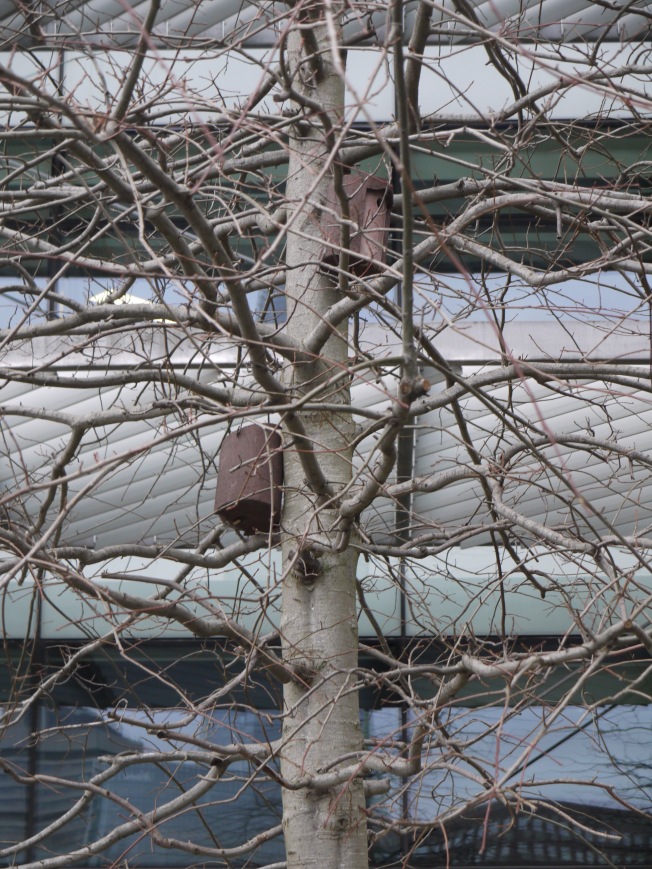 The path was barred at one point as a new staircase is being constructed. This is how it will look.

This is how it looks now. 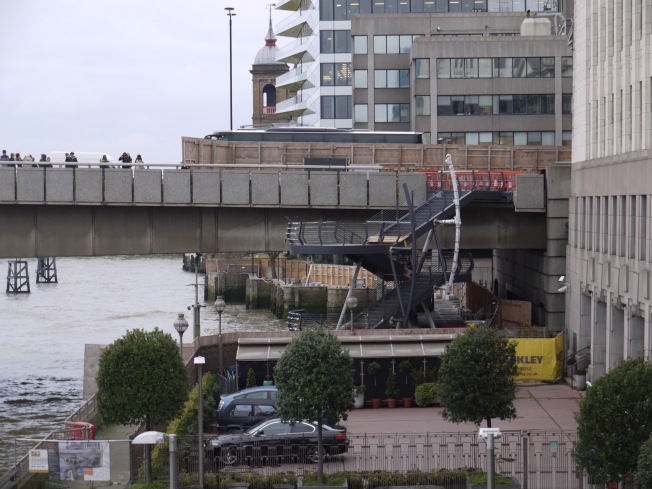 How it looks now

Tower Bridge is always a bit of a showstopper.

By Custom House we stopped to watch the birds on the river; a pair of coots, gulls, cormorants. One gull seemed to be playing with a plastic bottle that was being taken out by the tide. The light was starting to go, but after some time at the Tower, and lots of information in the Tower shop about the tree decorations from a fabulously enthusiastic and knowledgeable member of staff called Philip, we moved on to St Katherine’s Dock where many of the boats increasingly look like status symbols.