So far 2017 seems to be The Year of Not Blogging, but hopefully that will change. It is also the year when language comes under fresh assaults from people who call lies alternative truths.

But let’s draw a veil over the last few days and think of something else, something that reminds me why the world is somewhere I still enjoy, and why I think it’s worth fighting to protect.

As I said in my last post over a week ago, Celia and I went on a ramble and as it was the anniversary of Aunt’s death, we thought we could call it Auntie Mary’s Walk. Just one problem: we’re not entirely sure where we went. Celia and I have yet to go on a ramble where we don’t get lost.

At this point I’m pretty sure we were on the right track. 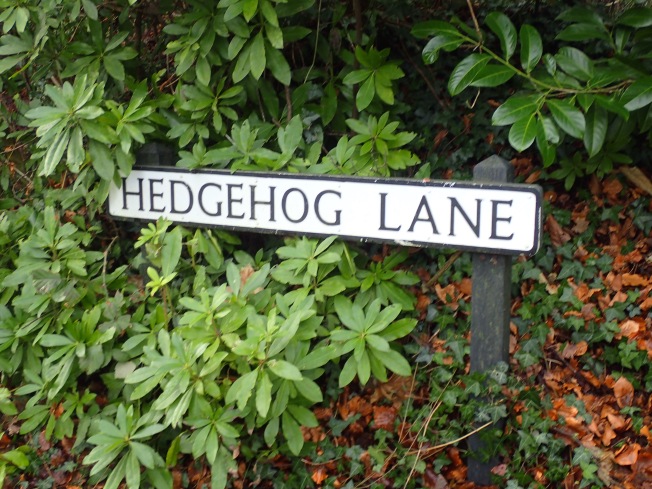 This wasn’t the route we were following, but it ran alongside ours for a while.

In retrospect, perhaps we should have followed it, as we never did reach the pub. As the pubs we have planned to eat at in the past have invariably been closed or no longer serving food, lunch has been the point where we have deviated from our planned route and ended up somewhere we did not expect to be. This time, although Celia called the pub and confirmed they were indeed still open and sold hot meals, I announced that given our track record, I intended to take soup with me. It was this (deserved) lack of faith that prompted Celia to go to Stanfords and buy a map. Though she did bring sandwiches.

We got lost quite early on, but were rescued by a woman walking a rather lovely Golden Retriever called Bingo. Naturally I do not know the woman’s name. She set us on the right direction and off we went. Given that we passed most of the things she told us to look out for, I don’t understand how we found ourselves at the wrong end of the map.

However by that time we had been thoroughly enjoying ourselves. The fields and ditches were covered in a dusting of snow. 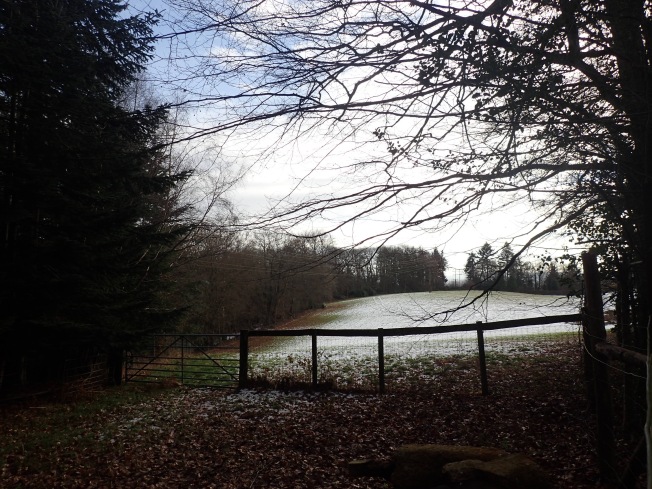 A Dusting of Snow

We spent a lot of time looking at this tree, home to some glorious fungi. 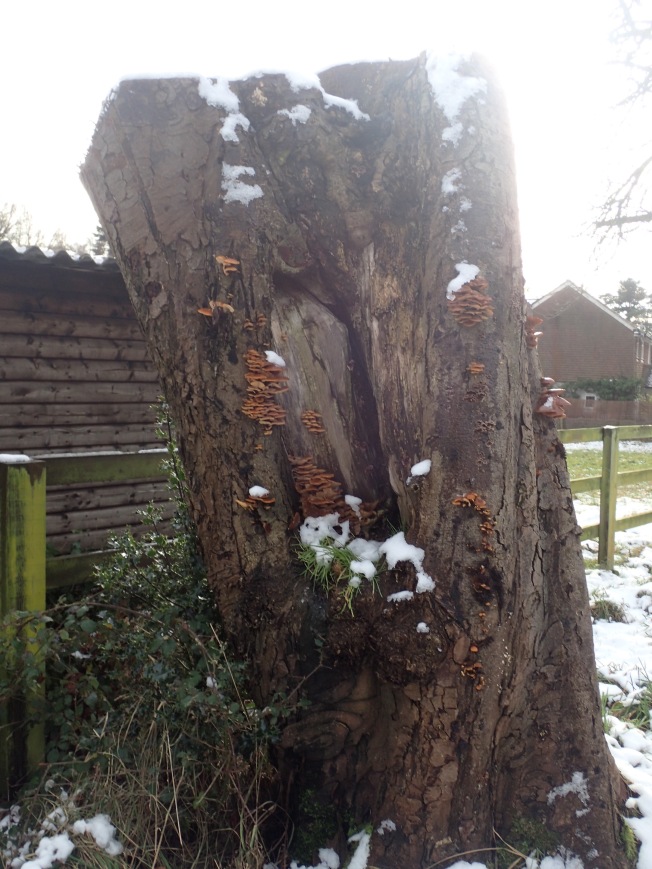 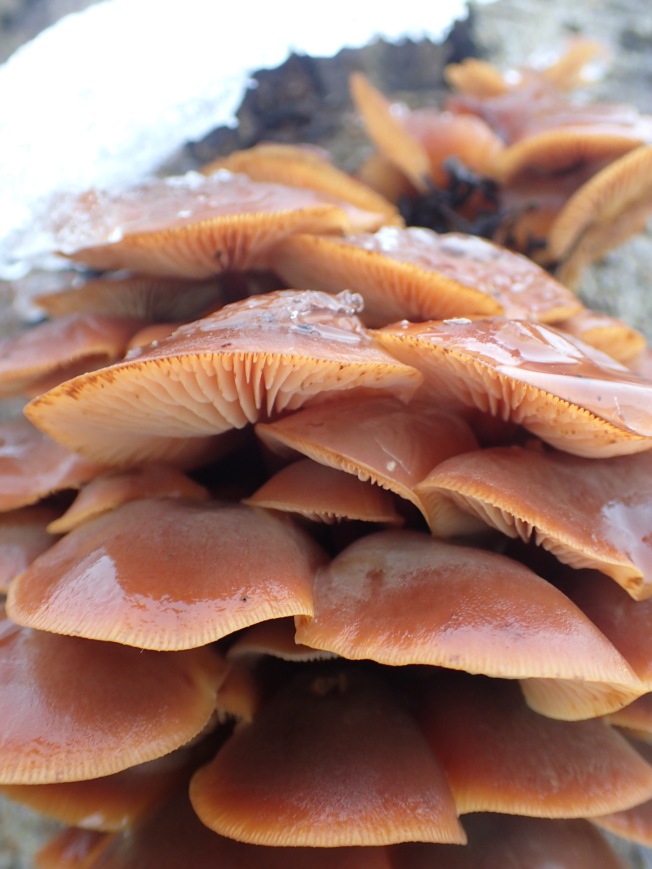 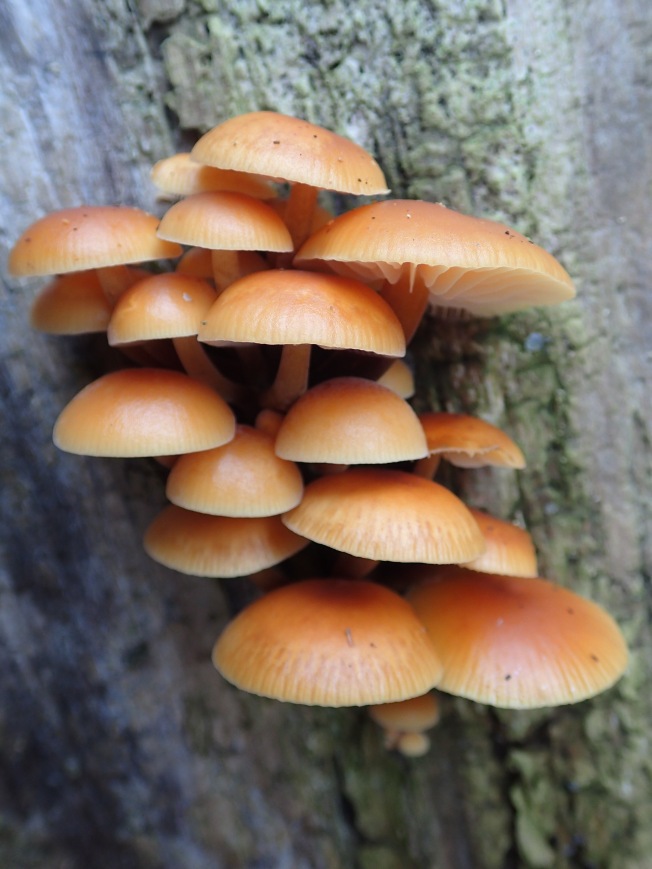 A tree nearby had fabulous lichen.

And in the next field there were donkeys who seemed happy to see us. 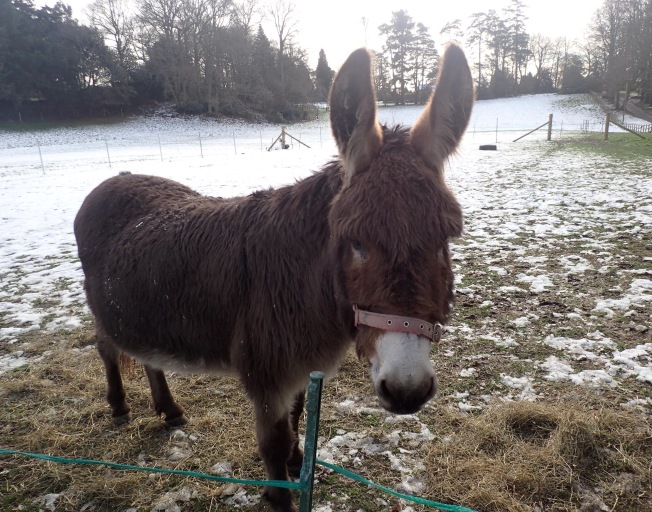 At the top of the not very steep hill, we snacked on our provisions and enjoyed the view. 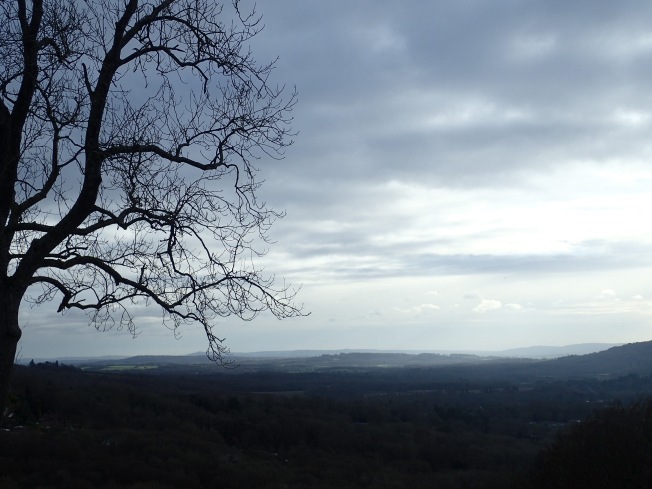 True, we could see quite a long way, but this sign seemed hyperbolic.

We were still quite happy with our progress. I had yet to discover that the tinned soup I’d put in my thermos flask contained an ingredient that would bring me out in an allergic rash, and Celia still thought she knew where we were on the map.

That changed at the bottom of the hill. There were a few houses, and a phone box. Someone had made two snowmen.

It was very nice, but there was no pub, and it was in quite the wrong direction. We found our way again without too much trouble, and arrived in Haslemere in time to enjoy the shops, and a café stop just as the rain came down. Celia fell in love with an enormous log basket and we both came home with new clothes. The basket shop had this sign in the window.

Aunt would have approved.

I’m hoping Celia will join me when I do a stretch of the Greensand Way in a couple of weeks. I’m meeting my clever cousin Russell. He’s a sculptor, and he’s agreed to show me a seat he was commissioned to make to go on this long distance route. I saw it on his website and loved it. You can see it here.

11 thoughts on “Lost on the Surrey/Sussex Borders”