Once clear of London en route for das Boot I generally stop at a supermarket for supplies, things I think I’ll need afloat – beers, coffee and so on. But not eggs. No, those I buy on the road that leads to the marina. Just a quick text to Janet Eggs to let her know I am on my way, and provided the hens are laying, half a dozen eggs are hidden in the mailbox attached to her gate. 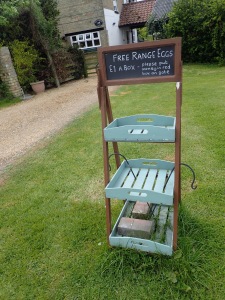 I don’t know how many hens Janet keeps, nor do I know her real surname, though it definitely isn’t Eggs. I do know the hens are free range and that any money collected from the sale of their eggs goes to support local good causes – someone in financial straits due to illness, the victim of a hit and run accident. Janet is a farmer’s wife. Before you accuse me of sexism, it’s only her husband I seen on the big machinery, his ears shrouded in the big protectors. I know she refers to him as Daddy when talking to her dogs. She has several dogs; golden retrievers, a Jack Russell who escapes under the gate to scamper around my feet, a standard poodle. Janet has never met MasterB, but that doesn’t stop her asking if he is with me and how he is.
From which you realise that Janet and I have met and talked. Our conversations are usually over the farm gate with the dogs barking beside us. It makes me feel that I have a small claim to being part of the local community, tendrils rather than roots. I can ask Janet about things observed on the road; the tethered piebald ponies that are out in all weathers, the house which always has lots of cars parked outside it, places to walk. We discuss personal concerns. She knew about Aunt’s cancer. I learned that before Christmas she was admitted to hospital for eleven days with an access on her appendix, and recently went back in to have the appendix removed. We discuss the the local wildlife, the large numbers of kestrels to be seen, one posing on a Passing Place sign at the side of the road as I drove past, the little owls on the road to Reach.

I bring her egg boxes. Not just mine, but the ones that build into a high stack in Octavia’s kitchen. And I take eggs back to Octavia and other friends in London. Eggs laid that morning, or at the earliest the previous day. 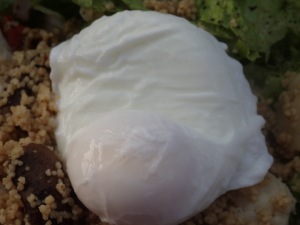 Perfectly perched on a couscous salad for lunch. 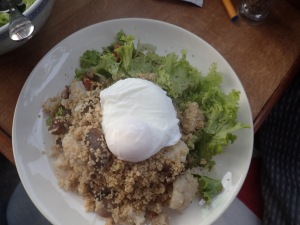 The salad comes from the organic farm at Reach where I make further small but regular contributions to the local economy.

Janet waved me off on my way home on Wednesday, telling me to drive carefully. She arrived back from somewhere just as I was carrying the eggs she had put to one side for me back to the car. She tells me she loves our chats over the gate. I do too, and I am grateful for this demonstration of goodwill and friendship which gives a sense of belonging to the scattered fenland community.