I’m very much looking forward to be reunited with MasterB tonight. Having the dog, cat and kittens at Cousin’s is lovely, but none of them replaces my boy.

That said, and our reunion warmly anticipated at least on my part, I shall be delighted to see WestieBoy, Mistress Lily, Dizzy and Dora when I am next this side of the Irish Sea.

Last night I introduced Dizzy to the delights of technology, and he got the idea and the bug so quickly we were already talking about restricting his screen time access. 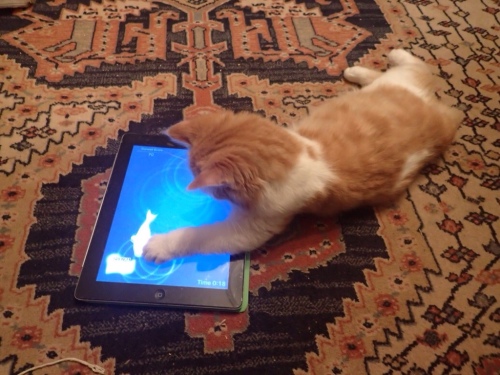 He reached a high score of 420. I was impressed. I deleted the game and tried to install another one, but my iPad decided this was all together too much and baulked, so I put it on my ‘phone, then had a little tussle reclaiming it from Dizzy. Still, it meant Dora was able to play undisturbed with the mouse which is everyone’s, including the dogs’, favourite toy, and to have forty winks undisturbed by her much larger brother.

Just look at that little face. I’m increasingly convinced she’s not from the same litter as Dizzy and that he is several weeks older than she. Did you see them with their mother, I asked Cousin. It transpires there were two adult cats with kittens. Do you think they could be from different litters? Oh yes, she replied, the man is a rascal. Dora remains shyer than Dizzy. That sentence is misleading. Dizzy and shyness are complete strangers. He has decided WestieBoy is his pal and role model and greets him confidently, quite without fear, and thinks his new big friend would be a handy cushion.

Dora claimed WestieBoy’s bed in front of the fire. Although it is much greyer than a week ago thanks to the muck and the slush that have stained the dog’s underbelly a dark brown, she seemed touchingly to think she was not highly visible.

A belief that was tested when Dizzy bounced on her.

They were curled up together on the kitchen chair, but when I approached with my camera Dizzy came to see me.

Mistress Lily watched their antics from on high. At one point she fixed Dora with a basilisk stare, but when Dizzy noticed her he had be be dissuaded from climbing up to join her. 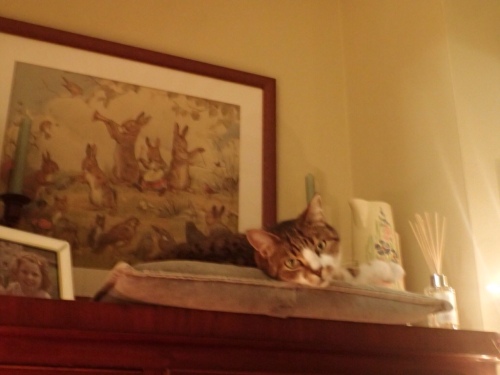 She rather pointedly turned her head and looked elsewhere. I think she has plans of dominion.

4 thoughts on “In Departure”