I’m ending the year feeling much better than I anticipated this morning. The cold which I started on Christmas Eve was gazumped midweek by a much more aggressive version which has left me in no doubt that I am not stoic invalid material. As a headache gripped my brow in a rusty vice and left me feeling sick each time I bent down I yearned for my health to be restored so I could enjoy my cat, my home, my life.

Friday was a particularly low day. I went out to work telling myself I’d be fine. My nose ran almost constantly and grew redder and sorer by the minute. I began to feel self-conscious and embarrassed at the number of times I had to blow my nose and find yet another bin to dump a wodge of used hankies. Yuk. I went to bed early, then up betimes yesterday for another day at work. Less nose blowing, but still gripped by the vicelike headache and prone to sudden outbreaks of sustained coughing. However by the afternoon I was convinced I was on the mend. Home via the shop to stock up on more boxes of paper hankies where I realised at least half the local population is in the same boat as I am. I nabbed two of the last three boxes of my favourite brand.

I made myself stay up until half past seven and then climbed gratefully between the sheets where I slept for twelve hours with some interruptions for coughing, nose blowing and glasses of water. I thought I’d be fully rested and on the road to health this morning, but instead I should have gladly turned over and slept some more. MasterB desperately needed time and attention from me and was keen to play. Off I went to work feeling as though my body belonged to someone else somewhere else and my feet were not truly making contact with the ground.

Then magically, mid afternoon, something shifted. I’m still coughing, still blowing my nose rather frequently, but it’s almost eight o’clock and I don’t think I’ll be in bed for at least an hour. I’ve eaten a meal with pleasure rather than out of a sense that I need the sustenance, and I have a glass of wine at hand, my first for nearly a week. Admittedly I’ve not drunk any of it yet, but just looking at it makes me feel more festive. I’ve even lit the candles and decided the Christmas decs can stay up for another day or two.

So to end the year and to welcome 2018 I’ve decided to post a picture from my archives of each month of 2017. They aren’t necessarily the best pictures, but just looking through the year, a year I have unusually spent entirely in the UK, I am struck by how much I have enjoyed visiting places familiar and new, how each month shows the lengthening then the shortening of the days.

So my first picture, taken in a local park last January in the late afternoon shows London in winter; spare trees, shadows and cool light, birds as silhouettes against the water of the pond, streaked skies as the sun goes down. 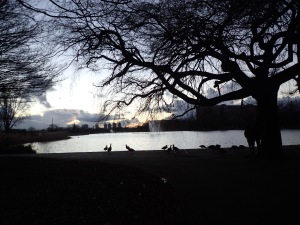 In February I went on one of several walks taken this year with my talented sculptor cousin Russell. I wanted him to show me this bench. 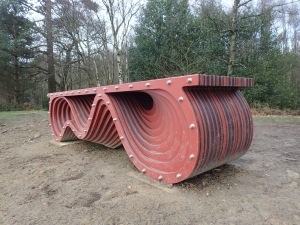 In March I made the first of two trips this year to Coventry, a city that surpassed my expectations and which I am thrilled has been awarded the title of City of Culture for 2021. No single picture of Basil Spence’s cathedral could tell the whole story, but this fragment of stained glass may help you appreciate how marvellous it is.

April brings the spring and Easter. This sculpture by Mark Wallinger stood on the steps outside London’s St Paul’s cathedral reminding us of how many people face torture and imprisonment for their beliefs.

My birthday is 1st May and this month marks the start of the boating season for me and MasterB.

May, reacquainting himself with the territory

June is officially the summer. I was at the boat quite a bit, enjoying the long evenings and spectacular skies. 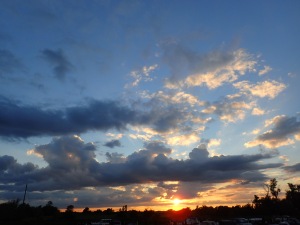 In July I made one of my four trips to Northern Ireland in 2017. More long summer evenings were spent walking the dog along the lane and looking at a landscape full of poetry. 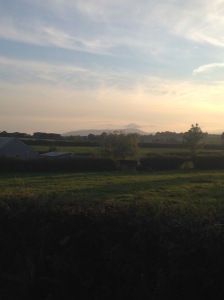 August might seem a funny time to enjoy being in the city, but London is magical all year round, and the SouthBank where I’ll be a fortnight this evening to listen to the shortlisted poets up for the TS Eliot prize, hangs loose and admits everything.

August is special on the Southbank

In September I had an away day to the Essex coast, visiting Walton-on-the-Naze. I’ll be back.

September by the sea at Walton-on-the-Naze

My last day trip of the year was to Ipswich in October. It wasn’t the best weather but the town, which I had been warned was not up to much, was delightful. I grew up on Giles’ cartoons so stumbling across this statue of Grandma with her trusty umbrella and redoubtable handbag brought particular delight and many memories. 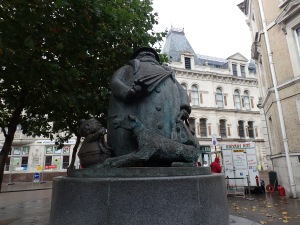 November was time to wrap up das Boot for winter, to take a last look at the fens until springtime, and imprint those huge skies on my mind’s eye and my camera’s lens.

November where the skies in the fens start at your feet

And finally December. The year’s end. A time to remember absent friends and mourn the loss, and a time to look forward to new longer days and the growing of the light. May 2018 bring peace and prosperity, may it be a year when we see justice and democracy rise above ignorance and prejudice. Happy New Year to all of you. 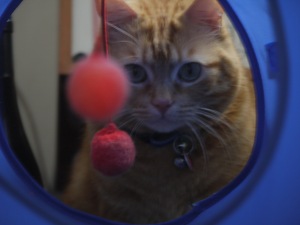