I set off on a damp morning to the V&A. My friend Patou and I had arranged to meet there to visit the Mary Quant exhibition, of which we have heard good things. Mary Quant came to prominence in the early 60s as a designer and entrepreneur, and name and her face were familiar to me throughout my childhood when the mini skirt was de rigueur. 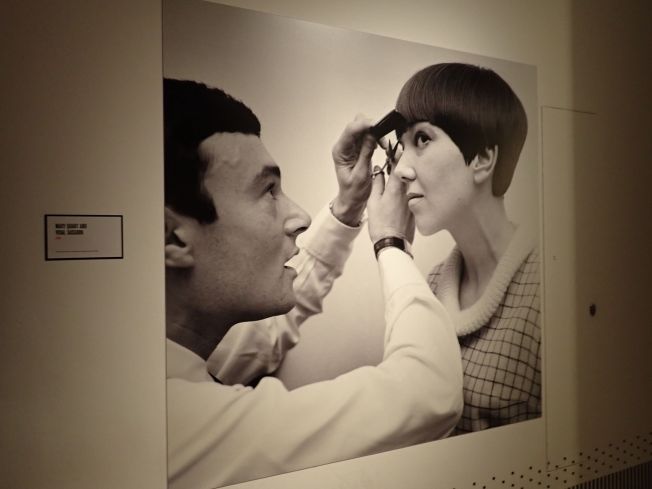 However, fate intervened, and when I reached South Kensington, it was to find a message on my ‘phone to say Patou could not join me. It might have been more fun going round the exhibition with her, but I had a wonderful time on my own all the same.

Although Quant’s fashions would have been splashed across magazines, those magazines would generally have been of the glossier kind that rarely came my mother’s way. So it was with something of a shock that I realised how much Quant had influenced the clothing I wore or saw older cousins and neighbours wearing as I was growing up. Apart from mini skirts, there were shift dresses, pinafore dresses, boxy suits, and pin striped materials previously the province of men’s suits. 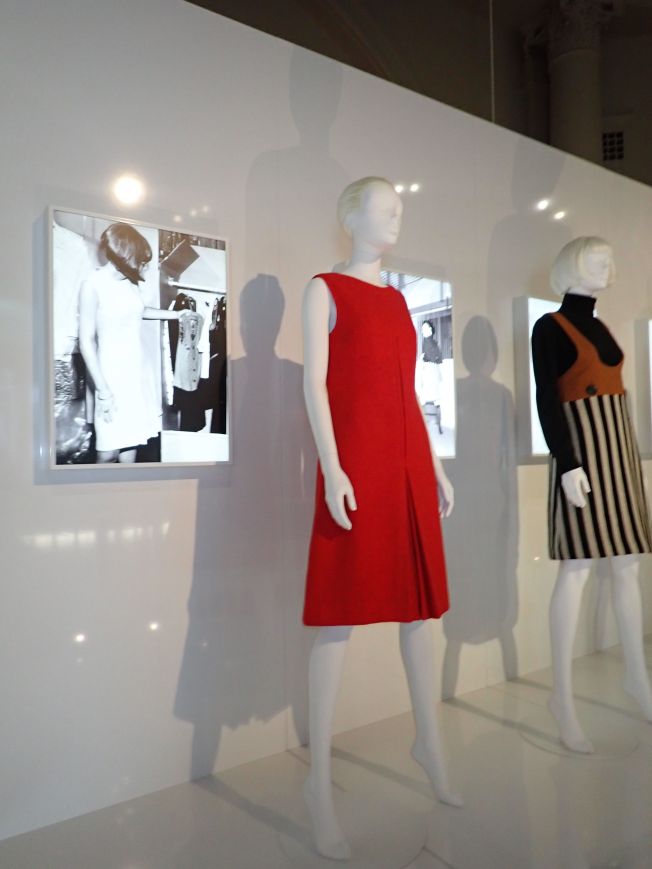 When I was at the Vice Versa exhibition in the Ulster Museum last summer, fortunate enough to have a tour with the exhibition’s curator, Charlotte McReynolds, it was clear fashion is very much part of social history. So it proved again at the V&A. At McReynolds 2018 exhibition Fashion & Feminism she included a quote by Quant: “Clothes always say it first, you know, then comes the effect.” That desire to get away from restrictive clothing, to be comfortable, to be gleeful, was all part of the emerging sixties youth culture. Quant does not claim to have invented the mini skirt, she says it was a street fashion, invented by the girls on the Kings’ road where she had her shop Bazaar. 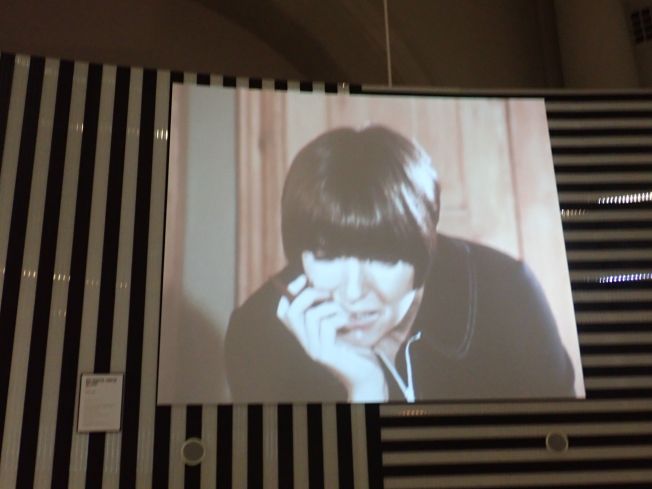 Not that I was aware of any of this growing up. My childhood in Guildford might have been only thirty miles from London, but the images of the Kings Road then might just as well have been from another planet.

Still, some influences obviously made it down the A3. I had a Ladybird pinafore dress in black watch tartan that I loved and wore for years. As I grew taller, skirts got shorter, so until I finally started to fill out, I wore dresses saying they were to fit an eight-year-old well into my fourteenth year. I think I got the pinafore dress when I was around seven. It had a low waist and a pleated skirt. It was great. I could do anything in it, totally adaptable and unrestrictive, rather like the Ladybird jeans I inherited from my sister who had been bought them when they were several sizes too big when she was still a toddler when the holiday she and my parents were on turned wet and windy. Come to think of it, a lot of my favourite clothes were Ladybird. There’s a photograph of me wearing it somewhere, but it may be one my sister has as I don’t remember seeing it for a long time.

So it was with a slight shock of recognition that I saw a similar shaped garment for an adult woman. 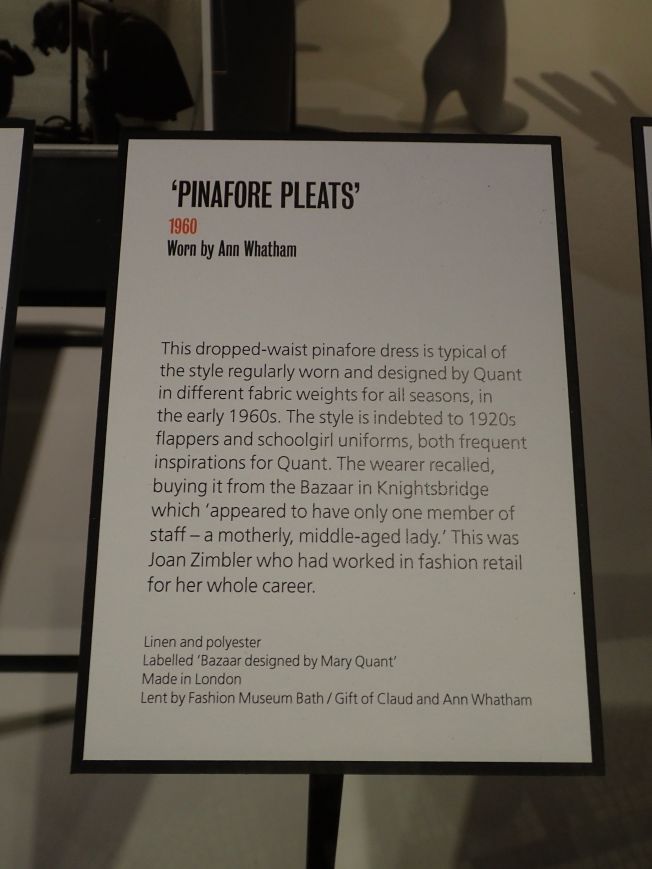 Well this explains it 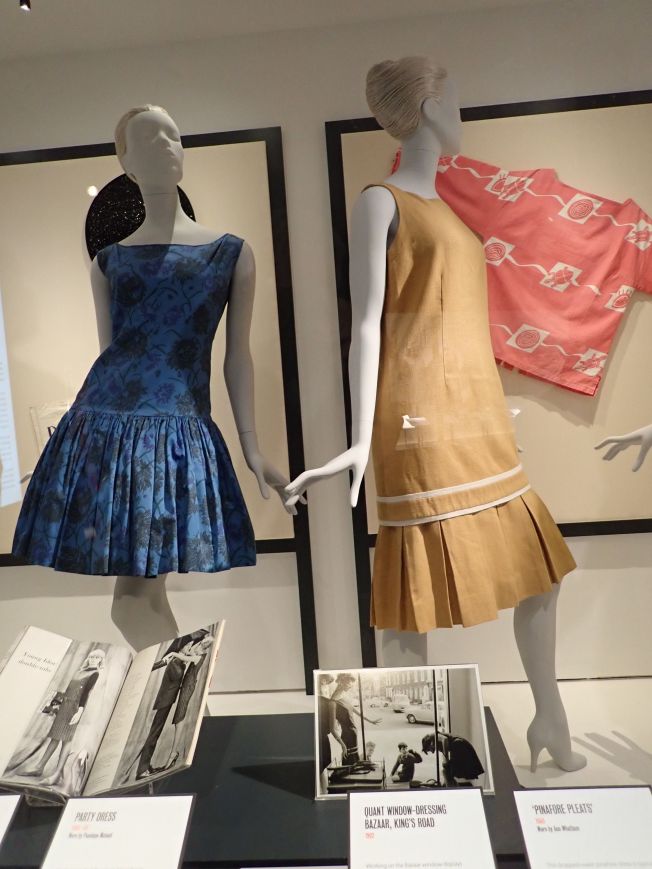 The waist on my pinafore dress wasn’t as low as this!

By an odd coincidence I was also wearing a pinafore dress today. This autumn I added two to my wardrobe, the first I have owned as an adult. One of them is tartan, and my childhood pinafore dress definitely influenced ny decision to buy it. Oh I have just remembered my beloved reefer jacket. Maybe I shall go all retro and get one of those too.

The clothes in the exhibition jogged memories of clothes I have long forgotten, particularly dresses; the shift dress I got for my tenth birthday; a dark blue woollen dress with three quarter length sleeves that was reduced at Marks and Spencer and which I wore into my teens; even my primary school uniform summer dress seemed to be Quant influenced (we all had the same fabric but could choose the design, made by in my case by my long suffering mother who did not particularly enjoy sewing). I was confirmed in my teens and, having finally outgrown all the clothes in my slender wardrobe, wore another pinafore dress, a much sleeker one, like a long waistcoat in grey pinstripe wool. Again the Quant influence. 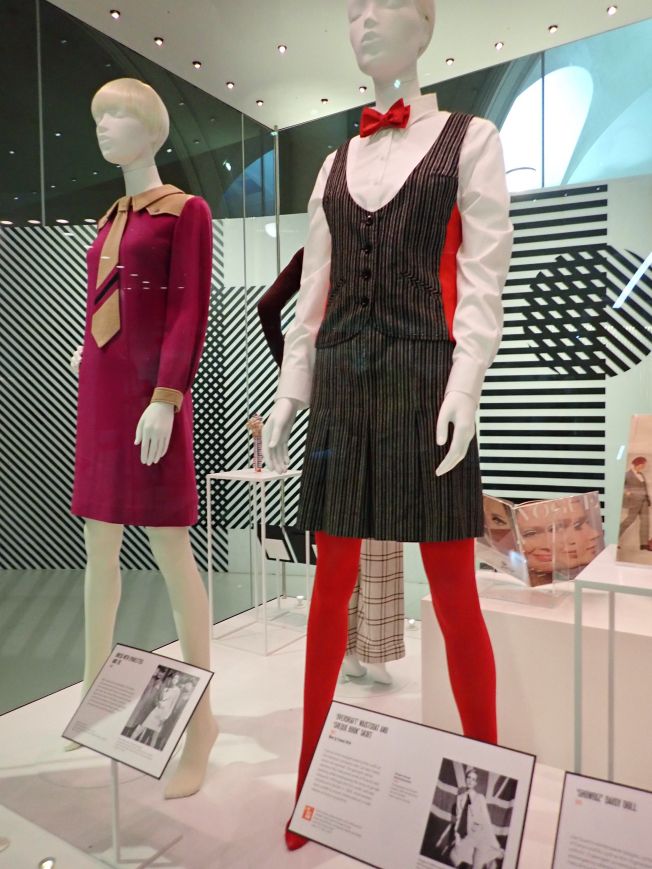 I had a neighbour some eight years older than me, so as a child an enormous age gap. I remember her wearing little suits with boxy jackets, boat necked dresses, a simple wool coat. Her hair was a straight uncompromising bob.She didn’t dress like her mother or like the other girls of her age in my road: she had been Quantified. I wasn’t the only one having my memories stirred. They were a number of women, and quite a few men, who I reckon were about a decade older than me, gazing and reminiscing. The paper bags, how can I have forgotten them? Glorious carriers with bright floral designs. 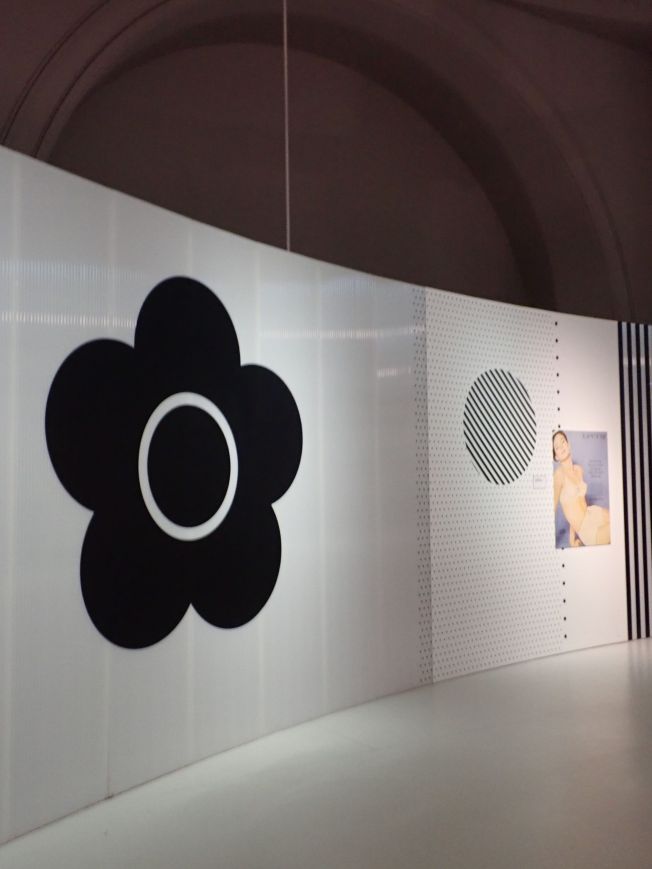 There were some German teenagers there, giggling, as teenagers do when they see pictures of past youth dancing and playing, but I noticed that some lingered behind their peers to look more intently at the displays and to take pictures. 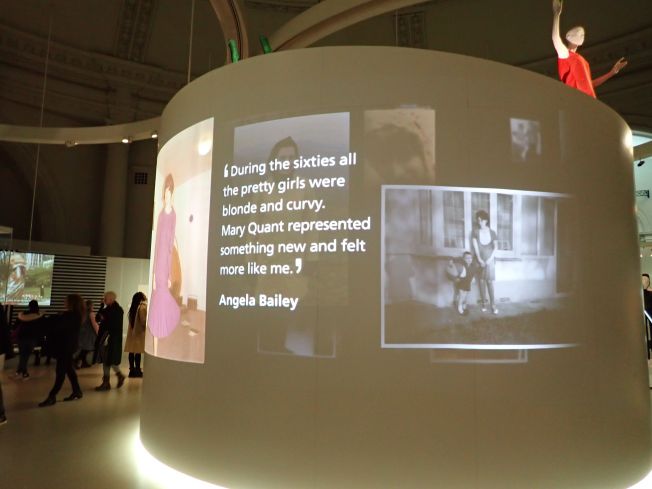 Go if you can, it’s on until 16th February and for a blast from the past it has a great feel of fresh air.