Beautiful weather today, and the barbecues have been going since lunchtime. Not chez IsobelandCat you understand. The one who does the cooking being vegan and not wild about barbecued veg, and the other, being a cat, has his own tinned food and weighed biscuits. It’s also been a lot louder. I am guessing some people are going to have bad headaches tomorrow.

Mind, having written that I realise it is not quite ten thirty and the music seems to be turned dow. There was disco coming from one address at half past one.

So maybe people have stayed home and been sensible. It’s so hard when the temperature rises and we throw open our windows properly for the first time this year to think there is a virus that can kill under our sunny skies. How do you explain to children that they have to stay in? Every muscle, every nerve, every instinct is telling us to get outside after a winter spent mainly indoors. My get of jail free card came in the shape of shopping for neighbours. It unfortunately does not also come with guaranteed immunity, and for the first time in days I had to ask someone to move away from me.

I queued outside M&S, all very orderly, then forgot to buy the milk B&J wanted, and managed to pay for the tomatoes twice on the self serve. I am hoping I can get a refund tomorrow. Celia wanted broccoli and there wasn’t any. I reminded her that Louisa who runs a local café which she has turned into afresh food shop for the duration had tweeted to say she had broccoli. Celia rang and placed an order. I thought I’d also check out what was available at the Farmer’s Market at Kennington Oval, behind St Mark’s church, so I took my bike and a rucksack. What I didn’t realise was that Celia had ordered more than broccoli. Louisa presented me with a crate. I didn’t have any bungees, but Lousia kindly offered to cycle with me to Celia’s with the crate on the capacious carrier she has on the front of her bike. My half kilo of new potatoes went into the rucksack.

I ditched the Kennington market plan and headed for Borough Market. Since breaking my wrist badly in a cycling accident six years ago i have become a nervous cyclist, and therefore a less than occasional one. Also my work often starts in one place and ends in another, cycling to work is no longer practical. But the roads are so much quieter have been itching to cycle, and my neighbourhood ride yesterday only whetted my appetite.
It was wonderful, liberating, to able to get so much further so much more quickly. It was like having wings.

My first impression was that the market was very quiet. There were the notices we have quickly become used to telling us to stay at home, to wash our hands, to keep our distance. Part of me longs to explore empty streets and take pictures, to witness and document. Another part of me hugs the safety of my home. That part wins.

I hadn’t seen a covered up water fountain until today. I think it’s things like this – closed toilets are the other – which somehow shock me most, and remind me that this is life suspended.

The area where the guest vendors are usually has become a dispatch hall. It felt odd, eerie. I don’t know why I can pass the silent pubs more easily than I can look upon scenes like this.

This should be buzzing

The main part of the market surprised me with how many stalls were open. Normally I’d avoid Borough Market like the plague (!) after ten on a Saturday morning, but this seemed pretty civilised. 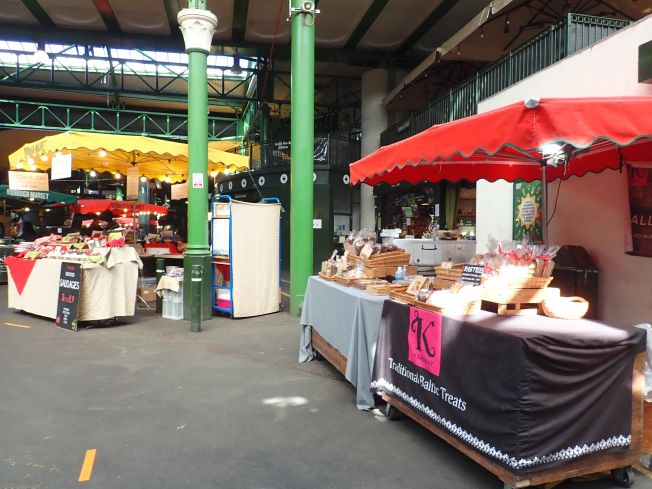 I looked about and rang Celia to ask if there was anything she’d like. I was standing in front of a stall selling nuts, Food and Forest, it is called. The nuts looked great and the staff were friendly, Charles, who I think must be quite high up in the company now I have seen his card, is obviously used to the innuendo and double entendre about his product. Though why French walnuts should be cheaper than English ones is a mystery to me. I should have been paying more attention.

He made a sale. It’s actually quite difficult having a ‘phone conversation at Borough Market because of the trains rattling by. I walked down to the closed pub, and rang Celia again. I had sent pictures of cheese stalls as she said she would like some cheese. Did anything fit the bill? There were people queuing. I didn’t hang around to find out why. I bought the cheese and headed back to my bike, grateful for the hand sanitiser freely available at the entrances and exits to the market.

The rest of the day has been spent at home, completing the decanting and filleting of files for tax purposes. One to archive, one for current use. I completed the jigsaw, and didn’t manage to put up the podcast I intended to record.

Too late now. I am off to bed.