My cunning plan to get my loose covers washed and on the line and get a stock of fresh vegetables before the breakfast washing up was done was only partially successful. I can’t say how many others thought the fine weather a perfect opportunity to to freshen up the upholstery, but I can say an awful lot had decide to shop early. There were queues outside shops that aren’t opening until nine at half past eight. So I did the washing up and got the second batch of loose covers on the line.

Then I joined the queue outside M&S. My top requirements were baby spinach and daffodils. It is easter weekend. Any weekend where a bank holiday is attached always makes people react by buying enough to see out a siege. Coronavirus has intensified that to the power of n. I called B&J and celia from the queue. If this was how the weekend was going to play out I wanted this morning to be my only contact with shops. Unfortunately at that point I hadn’t taken stock of how little tonic water I have left to add to my real or non-alcoholic gin. That was a discovery I only made this evening. Ho hum.

The shop was fairly successful in that I got everything on their very short lists, and my daffodils. No spinach. Try at ten or ten thirty the nice man filling shelves suggested. He had already fetched daffodils from the store room for me. Somehow the idea of rejoining the queue mid-morning didn’t have a great appeal. Deliveries made, home again, daffs in the vase, I considered my option and decided to go to Sainsbury’s at the Elephant. I could avoid the main roads, cross through some green spaces, and if the queues were dire there I would at have least been for a walk.

I walked past what used to be a old boozer and which is n ow a self-consciously hip pub. A closed pub, as all our pubs are. And as with many of closed food and drink outlets now offering alternative services.

I love the ‘proper wine’ bit, and the painting of a hipster that tells just what sort of clientele they want to encourage. Not me, obviously.

Anyway, there was no queue at Sainsbury’s, I went straight in, found everything I wanted in the fresh fruit aisle and nabbed a double pack of paper hankies. Lots of loo rolls but I have some already. Excellent. As Cagey said the other day, we have all turned into hunter gatherers. All that shopping took up most of the morning.

I am not sure quite where the afternoon went, though I did have a long ‘phone call with Octavia who has just returned from Yorkshire having handed over to her sister who will now stay with their mother. Before you throw up your hands in horror, her sister had had the virus, and Octavia, a doctor has volunteered her services in London during the crisis.I wanted to hear her observations about a London that is very different from when she left three weeks ago. In Yorkshire, she told me, everyone is obeying the social distancing instructions to the letter. When she passed the local street market here her eyes nearly fell out of her head.

Later I called at her house as she had something for me. We had a further conversation across the pavement. I noticed something red in the tree above me, a hair tie. It’s been there for ages, said Octavia, someone must have found it and hung it on the tree. I looked again and realised there were two. What’s the story behind this? 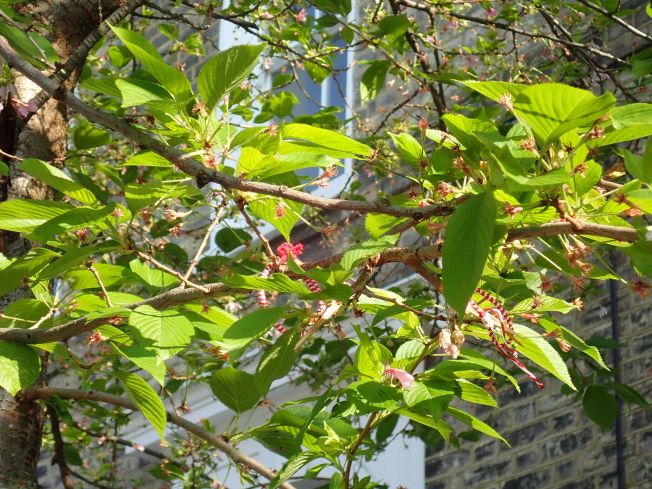 Home, and I tried twice to record a podcast. Each time the ‘phone rang. I gave up and collected my washing from the line. Now for the hard bit. They may be called looses covers, but easing the cushions back inside, getting the cover over the frame is like trying to squeeze into a pair of jeans two sizes too small. I managed it at last, though I have for the moment had to leave the zip at the back open about six inches. MasterB was increasingly impatient with me. He wanted his dinner and he wasn’t going to wait quietly.

For once I have written up my diary relatively early. My own dinner waits now, so I shall stop.