Up betimes, and the plants watered before the day warmed up. According to Celia this si the end of pur sunny spell, and having reached 26C the temperature is due to drop to 12C. Presumably that means there will be fewer people in the parks. After my experience yesterday I decided to return to the City for my constitutional today. I rode my bike as far as Guy’s Hospital, then left it to walk over London Bridge and up to Leadenhall Market. You never see Leadenhall Market like this. It’s busy during the week with City workers, busy at the weekend with visitors.

This shop window felt quite poignant. They must had had the Easter display up weeks ago.

All Hallows Barking by the Tower looked very fine. It’s a church that survived the Great Fire, and Pepys knew it. The year before the Great Fire there was the Great Plague. People have drawn parallels between then and our current situation. We owe much of our understanding of those events to Pepys and his fellow diarist Evelyn. If WordPress is still going in for hundred years time, maybe scholars will be picking over this and other online diaries.

All Hallows Barking by the Tower

The Tower itself was quiet.

Obviously it’s closed to visitors. When Celia and I ventured into the City two weeks ago there was hardly anyone about. There were more today, mainly cyclists, perhaps like myself opting to take their exercise somewhere other than a crowded park. Strangely I met one of my regular clients there. We chatted and I told her about my podcasts. I hope she’s going to listen. I was surprised to see two Yeoman Warders in their work uniforms by the closed gate. I had a chat with one of them. It turns out he’d love to visit the Titanic Quarter in Belfast. Do it, I advised, it’s excellent. 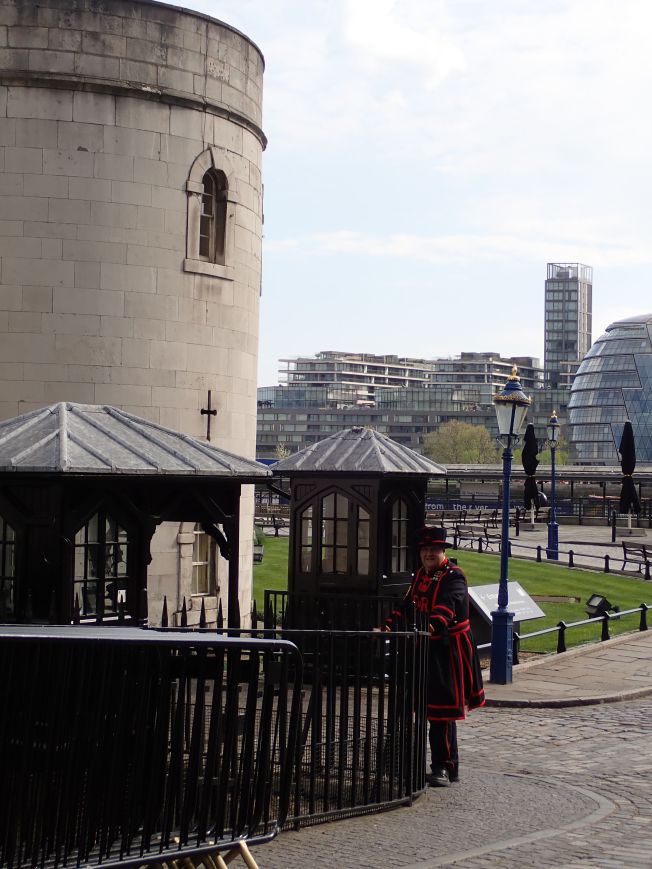 One more picture of the deserted wharf which I took through another set of railings.

then I returned to London Bridge via the river path. I took lots of pictures. Too many to share now. The obligatory ones of Tower Bridge and the HMS Belfast. 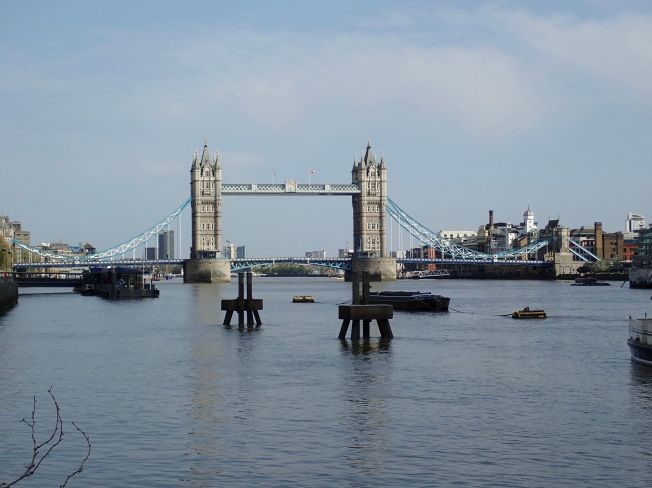 But also some wonderful ceanothus, and the south side of the river elected and refracted in the Clarkson House windows. I love the way the tower of Southwark Cathedral has gone wild.

You can probably tell I was enjoying myself. That’s the weird thing. There are some really great opportunities at the moment if you aren’t ill. I don’t mean money opportunities – if only. I mean opportunities to see London as you have never seen it, to cycle on normally heavily trafficked roads where the bus and the bicycle now are kings, to breathe air which is so very much less polluted, to take time, because time is all you have in abundance, and if you are like me you are not using this time to clear your cupboards.

Gulls were using these buoys as perches, one each. You may not be able to see them, but take my word for it. 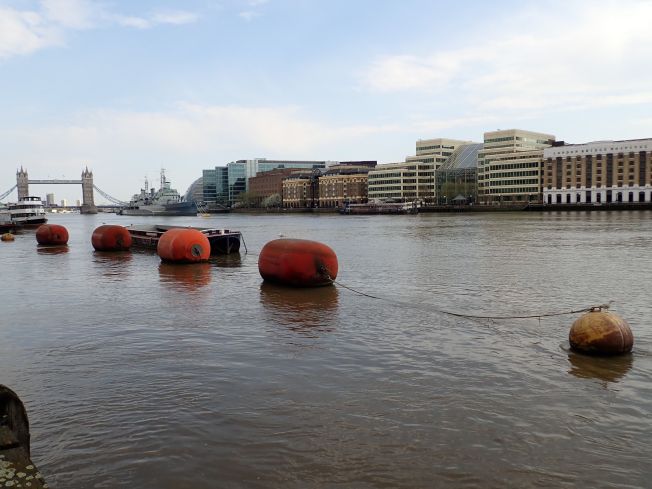 You don’t have to be sick or at risk though to be having a tough time. I met two homeless people on my excursion, both had dogs. Although hostels accommodated some of the homeless during lockdown, those with dogs are still out on the streets. Their dogs, Rocco who was intent on licking me to death, and Red are both Staffies. Their owners need £10 for a bed in a hostel that accepts dogs, and with few people around, pickings are slim. I didn’t get a picture of the lovely Rocco, but this is Red. I spotted him when I was unlocking my bike, he was up the street outside London Bridge station, his tail wagging like a metronome. He greeted me cheerfully, but the smells on the pavement were obviously more interesting.

Oh and here too

While he sniffed, hs owner whose name I don’t know, had a chat.He was a man of obvious intelligence and more optimistic about the future than I would be in his position. Red sat down beside him, and I thought I might at last get a better photo of him. Would you mind if I photographed you too? I asked. Go ahead said the man.

Red turned his head and displayed a noble profile. His co-owner was approaching, the man’s partner. They were lovely, all three of them, as was the man with Rocco. If we are going to emerge from this crisis a kinf=der society I hope they all find their forever homes and live happily ever after.

My mood was further sobered by the very sad news tonight that Tim Brooke-Taylor has died from coronavirus. His awful singing, and yes I know that will sound odd but you have to hear it to understand, was one of the delights of his appearances on Radio 4’s I’m Sorry I haven’t a Clue,just or Clue as it is often affectionately called. His lack of skill in this department was matched, and perhaps even surpassed bY Jeremy Hardy who died last year. Enjoy and remember.

Keep well. And if your name is Rowena Towler, happy birthday!