On the way back from our walk in the City today a woman ran by us. Celia, I said, why is that woman wearing a wig and a false moustache? Celia didn’t know, but she hadn’t noticed either. Lockdown does strange things to us. Earlier I had become somewhat over excited at the sight of a lone canoeist on the Thames at Bankside. Yesterday we saw two canoeists as we crossed Vauxhall Bridge. If we hadn’t stopped to gaze at their wonderful, perfectly socially distanced paddling, we might not have encountered Frederick. 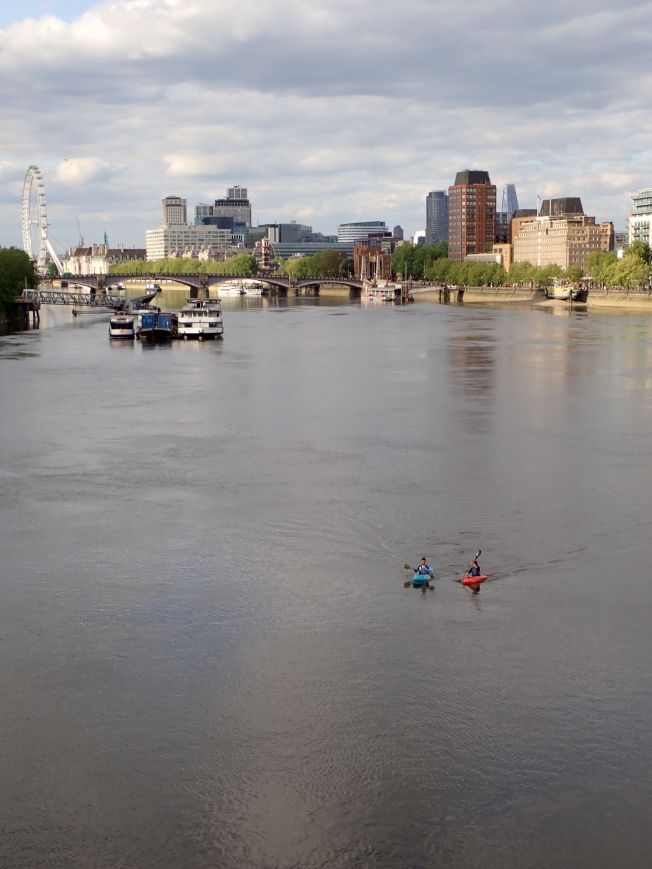 He had leant his bike against the barricade that protects the cycle path from the cars and was climbing over to the main carriageway. He wasn’t finding it easy. What is he doing? said Celia as we stared at him. He held up his hand as cars hurtled towards him and Celia and I gasped for his safety. Perhaps I should mention Frederick (he introduced himself later) was a man not in the first flush of youth and his appearance was a little eccentric. I’d mention wild hair, but my hair was probably looking fairly wild at the time, so I’ll skip that bit. There was a jacket on the ground, Frederick wanted to pick it up.

Amazing what you find in the road, he announced cheerfully, still the car side of the barricade. He was pleased with his find, a waxed jacket. Celia and I were now firmly in the role of audience and Frederick was playing to us. Let’s see if it’s a good make, he said and spread the jacket over the barricade to check the label. Marks and Spencer, he announced, not bad.

Still the wrong side of the barricade he engaged us in conversation, asking if we liked music, and inviting us to join the Choir With No Name, which in normal times meets on Shaftesbury Avenue, assuring Celia that her avowed inability to hold a note was no impediment. A further inducement was offered with the news that a meal, usually with a vegetarian option, was served afterwards. Some of what he said was lost to the sound of the traffic, but he told us to watch something which we think was titled The Trouble With Mother on Vimeo.

Today, as yesterday we saw people wandering along the foreshore while the tide was out.

though we didn’t notice any ducks today. 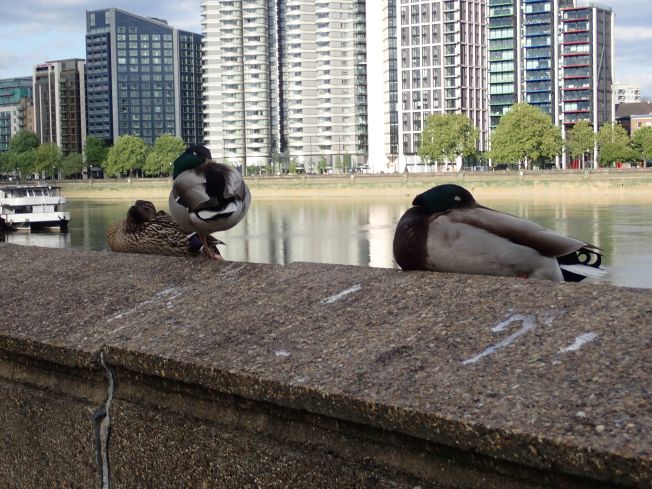 What a contrast at St Paul’s from when we were there at the start of lockdown and it was deserted. Today there were groups of cyclists and families, people sitting on the steps enjoying spring sunshine.

On the way home over Southwark Bridge we realised the lights were on.

The small print on these posters seems more hopeful than accurate.

We must be approaching our sixtieth day in lockdown. It’s a mess. The mixed messages from government, the divide and rule tactics, the attacks on teachers calling them workshy when they say they want facts not vague assurances about their safety should plans to reopen schools go ahead, the snide remarks about how much police are earning in overtime. We need transparency and accountability.

My Ground Floor Neighbour not only had a friend visit her in her flat last night, her friend also stayed the night. Lockdown is being broken in ways that compromise all of us. We need a clear, well-thought out exit plan, detailed and practicable, communicated in unambiguous language.

Unfortunately that is not the way Boris Johnson operates, and his fellow cabinet members take their cue from him.

We’ve got our work cut out.