Shall I write about Dominic Cummings, how alone in the UK under government guidance it is acceptable for, nay heroic of him to drive 250 miles to his parents and then visit beauty spots with his wife and son? How key members of the said government are queuing up to say it as absolutely fine and no story at all? I don’t think I’m going to insult your or my intelligence. We know he shouldn’t have done it, we know this is a hypocritical cover up, we know certain parts of the press will condone it, we know anyone else would have been forced to resign. I say anyone else but of course Johnson seems to have a special power that allows him to move between Downing Street, Chequers and perhaps a couple of dozen other addresses unknown to me.

It makes it very hard to maintain a Pollyanna view of the world.

So instead I am going to write about my day which unsurprisingly did not include a 250 mile trip to my parents. As my parents are both dead it would have been beyond my power anyway, even if I had felt like flouting the government’s advice. I didn’t go more than about a mile and half from home but I still had an enjoyable, varied day.

I started well, outdoor and indoor plants watered, seedlings unwrapped from their clingfilm cocoon and placed in a sunny spot, Romeo fed with a sachet of cat food. MasterB had breakfasted earlier. The bathroom surfaces sparkled, I swept the communal stairs which were very dusty, and restored the kitchen surfaces to pristine models of hygiene. Lunch. Then I turned to the jigsaw. About three hours passed. I am enjoying and not enjoying this puzzle. The cardboard pieces are flimsy and move very easily but the image, of the coats of arms of 102 its livery companies with panels of text about their collective history and the Lord Mayor’s show is interesting. I have a fair familiarity with the livery companies so their names and a number of their coats of arms are known to me. If I can prevent MasterB from sitting on it and dislodging pieces or skidding across it and destroying the whole thing, I should finish it in a day or so.

MasterB asked to go out. This is not unusual. However, between asking and actually leave ng the premises he often changes his mind. We do a lot of standing on the front door step. I hold the door open, he decides if out is really where he wants to be. The sight of Romeo immediately causes him to decide in is preferable, as does a motor bike, a scooter, a loud child, a group of loud adults, a car travelling too fast. Sometime I cannot see what it is that had decide him against the outside, but he runs and I walk back up the stairs and into the flat. Today was different. Hardly had I opened the door than he was outside and striding confidently towards the garden gate. I left him to it and went for my own walk.

Celia had thought she might join me, but another neighbour was with her in the garden so off I went on my own. On a whim I turned down beside a row of newly refurbished railway arches. 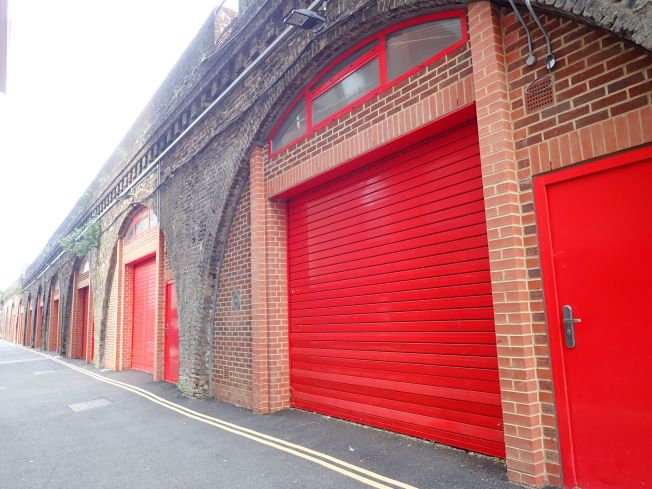 Red is the colour

I imagine that a few months ago the business prospects for these arches were good, and whoever is leasing them was anticipating a tidy return. Not so today. There was a cut through and I could hear voices, laughter, and smell a barbecue. A Latin American family and maybe their friends was having a bit of a party. Whether they had any right to be there I have no idea, but they were definitely enjoying themselves. A bit further down the road I saw these railway arches, unrefurbished but with businesses in operation. And a dog. There must be a moral in that somewhere.

I went on and walked through a block of flats near the main road. I could a man’s voice, very loud. At first I thought he was on the street, then I realised he was in one of the flats. Just his voice, his tone exhorting, no one else speaking. I tuned in. You must pray, he was saying, you must beg God. I understood then he was preaching to a virtual congregation from the safety of his home. 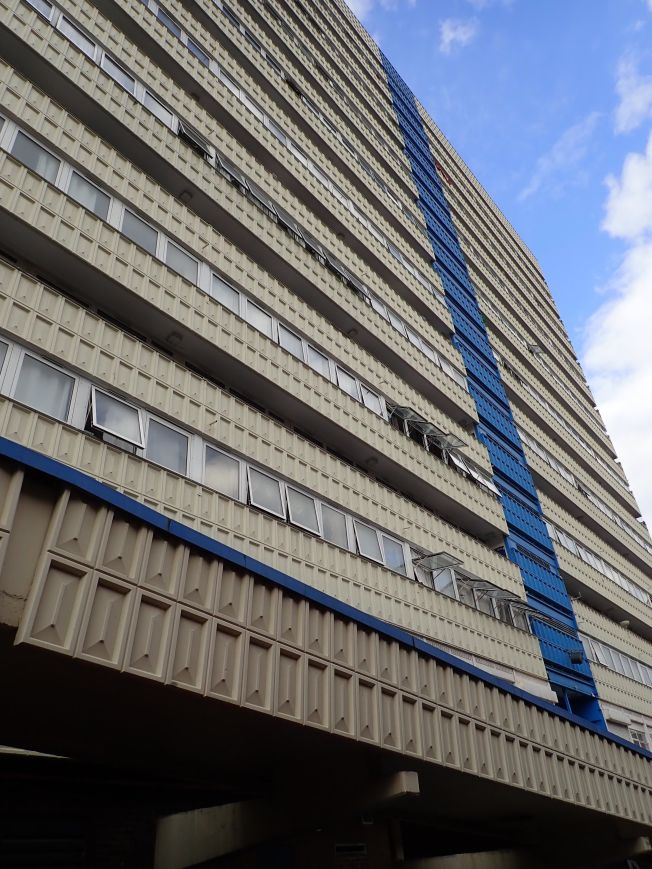 Away from the main road and yet more beautiful roses. Not all roses are sweetly scented, some have virtually no scent at all.

Beautiful to look at

I was hoping to pick some rocket from the communal beds but there was a bit of a party going on beside them and I felt shy. I did manage to photograph one of Chloe’s Bengals though. 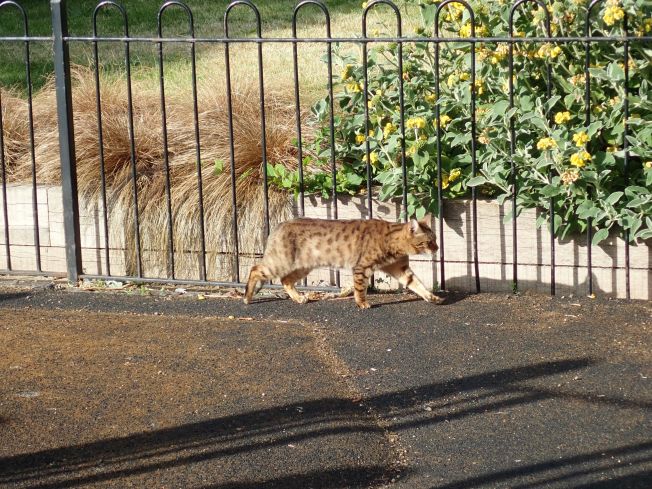 Bengal cat on the prowl

On another whim I called Octavia. She was home and we arranged to meet for a socially distanced chat. Or chat and wine as it turned out, complete with Grey Ninja and pink flowers.

The prettiest Russian Blue you ever will see

Then it was home via Celia’s where I needed to collect my compost caddy. We chatted for a further twenty minutes or so. I admit I had completely forgotten MasterB was out in the big wide world without me there to be his bodyguard until I approached the flats and he jumped onto the pavement in front of me with a friendly meow.

I take it nothing untoward happened to him while he was out. He was happy, keen to have his dinner, and soon afterwards jumped onto the chair and went to sleep.

I am going to follow his example and head for bed.