Forget what I wrote yesterday about needing to do any physical work by eleven. Today by half past nine I was working up a sweat just walking from one end of the boat to the other. MasterB has spent most of the day stretched out on the floor below water level in various locations, mainly where I can see him, but sometimes under a rug. I did two small lots of hand washing, and, using a broom handle as a support, rerigged my washing line, doubling the length of line available, and got everything dry.

Lying in a cool spot

The windows and the door are open, and there is a slight breeze. It’s cooler by the car under the trees, but people walk up and down the path which the boy wouldn’t like, so in solidarity I have spent the day on board with him.

It’s very easy to just sit thinking how hot you are and not get anything done, so I pulled out a file, made some notes and recorded a new podcast. If I can get the internet to play I should be able to upload it this evening. It was a good thing to do. While I worked I was less distracted by the heat. I drank copious glasses of water. Most of my exercise today has been walking backwards and forwards to use the loo in the shower block.

There is still something leaping from time to time, but I never seem to be looking at the spot, I just hear the splash and then see the concentric circles in the water. The fish I can see a re small with red fins. Normally they dart about, but I was watching them a little while ago and they seem to be just hanging in the water, a little below the surface. I am guessing they are enjoying the heat as otherwise they could swim down to the cool mud. They certainly dive when they see my shadow. 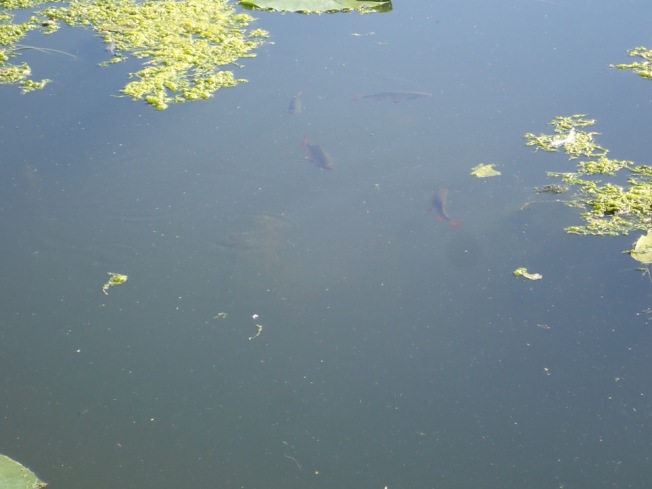 Just after writing that I saw a very big fish, or rather part of a very big fish, swimming under the duck weed, so I saw it in a gap. I have no idea what it was, but it was grey and marbled.

The pennywort is growing and so it the duck weed. Both worry me. I want the swans and ducks to come and nibble it all away from around the boat. The ducks returned last night, though they didn’t visit me. I think they have given me up. They sat together on a diving board at the back of a nearby boat.

The swans come and go, but they seem to be spending most of their time on the open river. The moorhens have abandoned their eggs and I haven’t seen them at all. Something was screeching last night. It didn’t sound like an owl, but maybe it was. It called and was answered by another screech down river. MasterB had a decent stroll, dug a hole to have a pee, decided it wasn’t in the right place, dug another, squatted, swivelled round when he heard something and decided to use the onboard facilities after all. As it cools down he livens up, so I expect we’ll be out and about around eight so long as no one comes to stay on a boat near us.

Two people have just arrived. They are carrying things to a boat I can’t see, but it’s a bit away from us. Their voices carry clearly across the water. That’s another thing MasterB doesn’t like. It could be a late night.

Stuart is coming at some point this week to fit the radio and CD player, so I shall be able to listen to the news on Radio 4 with luck. At least I had a message to say he was coming, but he didn’t say when. As his diary tends to fill quite quickly I may have to wait a bit longer.

All the cows lay down in the field at lunchtime, the adults and the calves. There’s a saying that cows lying down means rain, but I think these were just hot and wanted to rest.

It’s not going to rain

Later, when they started getting up I had a chat with a couple of them. One calf looked very much as though he was tempted to come over to me, but fear or shyness got the better of him.

An adult cow was bolder, and came up to the fence to inspect me. I admired her eyelashes. She stood watching me for some time after I had got back on the boat. There’s no sticky weed growing around the marina I have seen or I should have pulled some up to give to her.

Hot weather is said to depress one’s appetite, but MasterB and I have both enjoyed breakfast and lunch, and I am sure dinner will be as welcome to him as it is to me. But now I am going to open my first Becks Blue of the day and maybe have some olives. Cheers.