It’s been a day of small but necessary actions and intermittent rain. I downloaded the snaps I took yesterday afternoon.

This is what I saw as I reached the community garden. 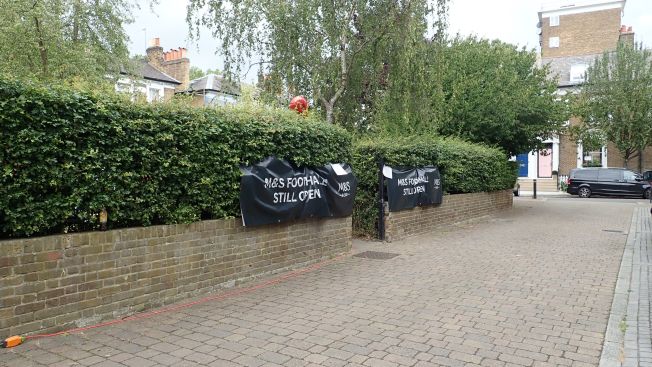 it was half past four. M&S had closed at four, so the idea was to give people a few minutes to change and come down to the garden. They were escorted by Kenon and Jane. The rest of us had been gradually assembling, chatting, peering down the street, waiting for the signal they were on their way. Some had dressed for the occasion. I admit the thought of so doing had not crossed my mind.

Once we could see them we cheered and clapped. As they arrived, some looking rather sheepish, they recognised us as the customers they see daily and there were smiles, waves and hellos as well as looks of relief.

There were speeches and presentations. Some went on for a while, and a parakeet made several unscheduled contributions, but the mood was good. 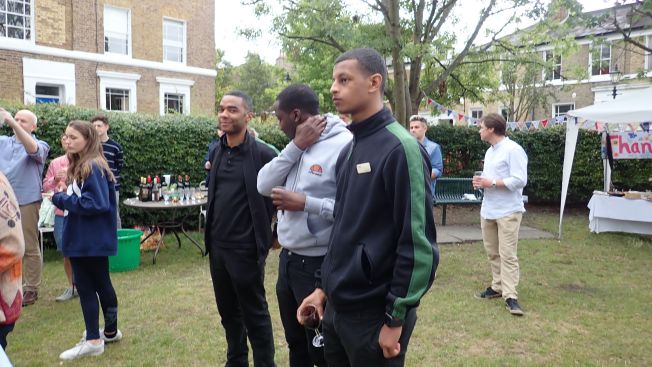 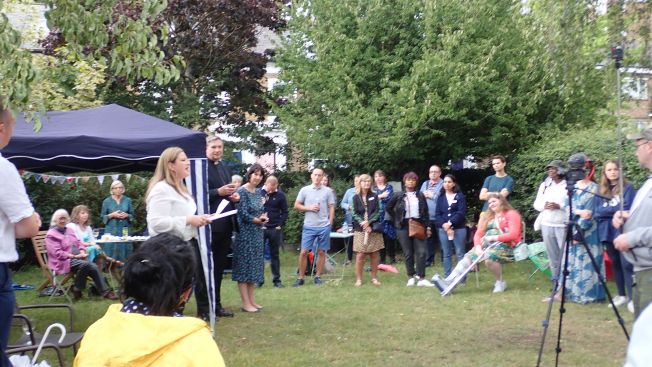 We all mingled and chatted; there were not separate groups of staff and neighbours as you might expect. I met the guys who moved in just before lockdown who I have seen having barbecues on their front steps. Norma interrogated Josephine about her mask and examined it carefully. She is about to go into mask production. The Welsh found each other. Much cake was eaten and wine drunk. Pictures of Romeo were shared and it dawned on several neighbours that theirs is not the only household this domineering tabby visits.

Tonight in contrast I have watched television, first the news where Cathy Newman really annoyed me when she seemed to be determined to make the story about a cat testing positive for Covid 19 about the risk cats can pose to humans while the scientist repeatedly explained we are the risk to cats. *Sigh*.

Then I watched Imagine with Alan Yentob and Lemn Sissay on catch up. Celia had warned me it was both wonderful and heart wrenching so I had the hankies ready, but actually didn’t cry, well not much anyway. I knew the terrible story of Sissay’s childhood from his book My Name is Why which I read some months ago. It was the footage of a young Lemn in his twenties performing his poetry that was so rivetingly astonishing, and his incredible lust for life. Watch it if you can. I thought I might watch the first part of A Suitable Boy tonight too, but I am not sure. Maybe the first part of the first part. I don’t want to be too late to bed and there’s a pile of washing up in the kitchen for me to do.