It may have been mainly about antiques, but there were an awful lot of dogs. 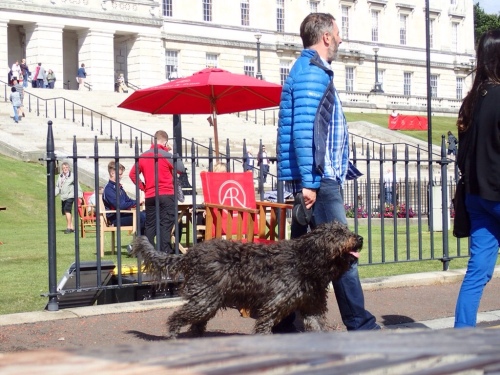 Some of them looked none too impressed that their walk had turned out to be a lot of standing around. At one point the heavens opened and we made a run for the tea tent. The camera crew carried on filming; dripping marquees, sheltering people, this dog.

The setting couldn't have been better. We were at Stormont. The approach is wonderful, and many of the dogs at the Antiques Roadshow yesterday enjoy their exercise in the grounds of the castle. Quite enough to give a dog a sense of grandeur.

Interest was fairly intense with knots of people gathered around experts.

These experts seemed to favour bright colours, whether in socks or trousers. 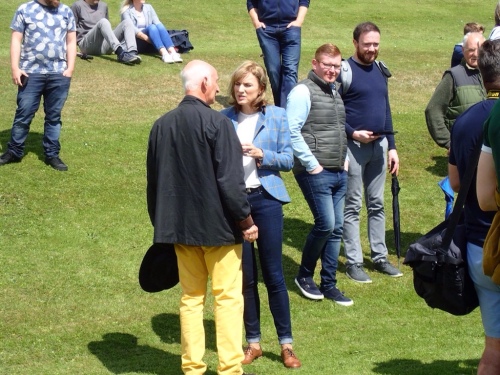 And Fiona Bruce's jacket drew admiring glances and comments. We caught up with her in a pre-recording moment talking to a man who had brought a glass inscribed no surrender, which had belonged to his grandfather. 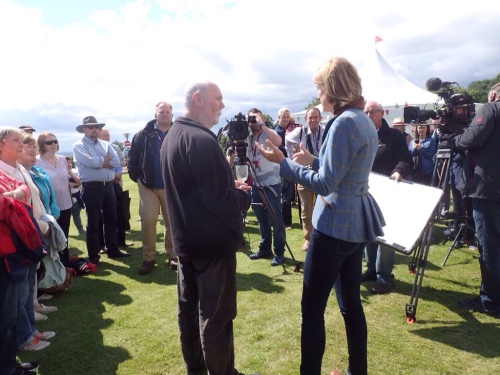 Although all three of us had agreed we did not want to be filmed, we were standing right behind her as the cameras rolled, so if you see a trio of women when this episode is broadcast looking alternately interested and uneasy, that will be us. We stayed as she prepared to talk to a boy and his mother. The boy, or rather young man as it turned out he was 18, Sam won the Norhern Ireland Young Musician of the Year competition, and we were lucky enough to hear him play his violin.

We quickly became paid up Fiona fans. One way or another I have met a few TV celebs. Most have been lovely, but one TV chef was a prat, quite the opposite of his bonhomous TV persona. Fiona Bruce fell firmly in the first category; professional, patient, natural. Unfortunately the black cloud which had been inching closer arrived above us at that point and everything was quickly covered over, the interview took place somewhere else while we sheltered in the tea tent.

END_OF_DOCUMENT_TOKEN_TO_BE_REPLACED

The trouble with not posting on a blog for while is that I have too much to say, too much to record, and sometimes, make that often, it's easier to draw a line under the passed days and start from wherever I am now.

I have always failed at keeping a paper diary for the same reason. Somehow a blog feels more forgiving. If this survives beyond me, and future family historians try to understand what great-to-the-power-of n Aunt Isobel's life was like, they may well suspect that the silent days were ones where I had nothing more to say than that I got up, had breakfast, fed the cat and frittered away the hours. If so, they will be wrong. In my head, walking along, on the bus, queuing in shops, I compose posts that are never written; posts where I muse on life's beauties and inequities, posts where I opine that the NHS could probably save a small fortune in anti depression medication if only IDS and Michael Gove were barred from speaking in public, or preferably at all, posts where I rail against cruelty to all animals, human and otherwise, posts when I realise that true happiness lies in the perfect poached egg.

Also posts about the Daily Mail, a paper I would go a long way not to read, but whose outrages are often reported elsewhere. A paper from which one might catch something nasty ending in ism. Does it have a purpose in the grand scheme of thing? Perhaps just to remind us of what hell might be like. I suppose Paul Dacre must have his uses, but so far I have not devined what they are. Apparently his staff have suggested his shoes never wear out as he goes from carpeted office to chauffeured car to home with barely any contact with the pavement, or reality. I'd like to think he pays enormous taxes that go towards funding the NHS, but I have a hunch he will have his money stashed in some offshore enterprise that means the exchequer sees little of what he is paid.

The Tory party has not learned from the Strong and Stable backlash, and is still in love with repeating alliterative phrases. The current fave seems to be stability and certainty, though for variety they are happy to use the words singly, then join them like cymbals for effect. I don't know how this goes down with other listeners, but I find I cannot remember a single word of what they have said other than the alliterative pairings, and those I translate as blah blah blah, a cover up for not really knowing what they are talking about. If they can't be bothered to make proper arguments why on earth should the electorate be bothered to listen to them, far less take them seriously?

END_OF_DOCUMENT_TOKEN_TO_BE_REPLACED 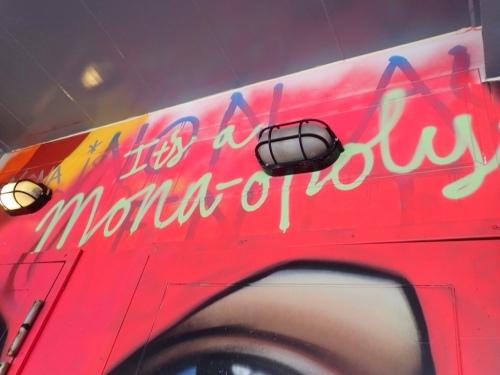 On the MONA Roma

END_OF_DOCUMENT_TOKEN_TO_BE_REPLACED

This picture is from February 2010.

I don’t really use this blog page anymore, but some of you  used to read about him and comment, so you know he was very special and important in my life.

Ian McMillan started it. He was on Desert Island Discs on Sunday, and he chose Stockhausen’s four minutes thirty-three seconds of silence as one of his tracks, though for obvious reasons they couldn’t play the whole thing on Radio 4. But it got me thinking. And listening. So all week, on and off, I’ve been tuning out and tuning in.

Yesterday I was at Westminster Abbey for the opening of The Field of Remembrance. END_OF_DOCUMENT_TOKEN_TO_BE_REPLACED

In another part of the wood, Bilby set a writing challenge. This is my draft, or if I don’t have any more time, final version…

When I was my mother the other week, I read her this poem. It was new to me, and if she knew it before, she had forgotten it. We both enjoyed it immensely. And I loved the fact that we smiled at the same lines; looked at each other with the same delight in its discovery; lingered over it and exclaimed at the humour.

Strange that my mother’s dementia should have led us again to share poetry. Had she been one of those ‘marvelous’ nonagenarians who have retained full use of  their faculties, we would probably be having far more prosaic conversations.

As a silver lining, it ain’t bad.

END_OF_DOCUMENT_TOKEN_TO_BE_REPLACED

I scratched breakfast this morning. I went to bed far too late last night, and as I’ve mentioned elsewhere, Cat, who is still suffering from some sort of gastric upset, used the litter tray sometime in the early hours. It could have been worse; he managed to keep it confined to the tray apart from a few splashes. Obviously, clearing it up was my first task when I got up. Call me precious, but there’s something about dealing with liquid excrement that depresses my appetite. I had a cup of coffee, and decided to hang on for brunch.

I like brunch. I don’t often have it because I’m also very keen on breakfast. And lunch. And dinner come to that. But I like the way that you can break  the rules with brunch, and put things together in an unusual combinations.  And you have different things to END_OF_DOCUMENT_TOKEN_TO_BE_REPLACED

I am paying for my lackadaisical attitudes. Yesterday afternoon, I used the tiny key to the little garden store, and when I came indoors, instead of hanging it up in it’s proper place, I, well actually I don’t know what I did with it. And that’s the problem.

Losing it has made me look around this cosy little flat with a different eye. Now, I am seeing books that belong on shelves, here or back at the library, in all corners. There’s a pen in the bathroom; an apple on the chest of drawers; two pairs of shoes make a trip hazard in the hall; a new paper lampshade unopened on a chair in the sitting room; a new prospectus for the evening class I want to sign up for. No minimalistic clear surfaces in this home. The kindest thing you could say about it is that it looks END_OF_DOCUMENT_TOKEN_TO_BE_REPLACED

When she had woken to the sound of heavy rain, she’d been perversely pleased. With Irish weather in mind, they’d packed heavy waterproofs along with the rest of their walking gear, and imagined evenings playing Scrabble, or reading fat novels with cups of hot whiskey to keep them warm.

But the sun had shone day after day, and the evenings had been spent on the balcony of their rental apartment in the converted barn, with glasses of white wine, and very little Scrabble and no reading. They’d watched bats swooping in front of soft sunsets and listened hopefully for nightingales. END_OF_DOCUMENT_TOKEN_TO_BE_REPLACED