At the end of a pleasant evening at the Royal Festival Hall listening to poetry, we are walking down the road, chatting. The subject of conversation; modest swimwear of our youth. On a doorstep, a young woman sits, her head hanging forward, talking into a mobile ‘phone. Her hands are covered in blood. We pause, look at her, at each other. In a slurred voice she thanks us, but refuses our offers of help. Someone is coming she says. She lifts her head, and through the curtain of bleached blond hair her face is bloody. We wish her a safe goodnight, head for the flat and find the number for Safer Southwark.

END_OF_DOCUMENT_TOKEN_TO_BE_REPLACED

I cycled home in a shower, the sort forecasters describe as wintry. It felt like little specks of glass hitting my face. So tonight, with freezing temperatures anticipated, I have hung up my cycle clips and topped up my Oyster card. In a moment, I shall take the bus to my evening class, or walk. Somehow, this feels rather sad.

And this is the last stone for January too. I have enjoyed this exercise; the being in the now, focusing on one aspect of the day that shines out for good or bad. Thank-you Writing Our Way Home for organising it. I shall be back. 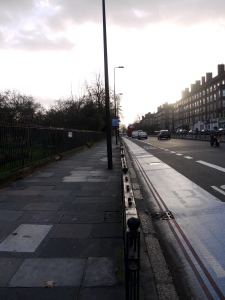 The Road Goes On

They have been quietly assembling all weekend; bringing in forces; readying themselves for today’s blitzkrieg. Action all areas. I knew something was up on Saturday. A tickle; a sniff. Then calm. The Phoney War. They were biding their tme; lying up; waiting for the right moment. Now they are everywhere; driving on caterpillar tracks down my throat; crossing the Maginot Line of my vitamins and garlic without breaking stride; billeted in the front of my head; artillery leaning heavy on my eyebrows. Bayonets fixed, they are swarming through the canals of my ears; taking up position in my nose, each rifle round fired, a ricocheting sneeze.

I am pretty happy with my lot and don’t yearn for huge wealth. I have more than enough for my needs, being of a frugal disposition, and can support the various charities and causes I believe in without being a martyr. I’m a long way from the gutter or even the widow’s mite.
I’d love enough money not to have to work, as opposed to not towork, but the lifestyles of Paris Hilton and her like look thoroughly uninteresting from this scruffy sofa.
However, from time to time, and especially when I look in estate agents’ windows, I wish I had semi-serious money. I was going to say I wish I were rich, but the houses I was lusting after this afternoon are in parts of town the really rich have probably never even heard of. END_OF_DOCUMENT_TOKEN_TO_BE_REPLACED

Not Cat went in ahead of me when I unlocked the garden gate. He looked to the left and stopped. He stared. His neck extended. He looked back to me. I followed quickly and looked too, hope rising in my chest. Sonny.
He has been missing for more than two weeks, a long time for him. I thought he might be dead, but as one of the only unneutered Toms around, I guess he’s been busy fathering kittens. Goodness how’s how far he’s roamed.
He’s lost some weight too. END_OF_DOCUMENT_TOKEN_TO_BE_REPLACED

How lovely to cycle to work under blue skies this morning. To see purple and yellow crocus and white snowdrops in the park; sunlight hitting the top of the Victoria Tower and turning it golden; the gleaming steel and glass of the Eye; and the pale green familiar dome of the Imperial War Museum. Structures which have become like old friends; constant constellations in an urban firmament, renewed by spring.

Tonight the moon is a simple slim crescent; a silvered sliver; a sickle slice; a lopsided smile, white in the dark sky.

I assumed the eighteenth century house was the venue for the talk about its chequered history, but when I checked the details, I saw it was in a library I have never visited in an area I know only slightly. It wasn’t that far away from home, but an awkward journey by public transport, and too many busy main roads during rush hour for me to feel happy about the bike. I decided to walk. A slight tussle with Not Cat who thought he should be allowed out made me slightly late, so I set off at a good pace, practising the new techniques I am learning.
The first part of the walk was familiar territory, but when I turned off the main road into a street I have driven down but never walked before, I found an unsuspected neighbourhood of gracious houses either side of a generous street. The lights were on in most, but few had drawn their curtains. The rooms looked comfortable, there were high ceilings and works of art. There was a pub on the corner, and musicians were tuning mandolins and fiddles around a table inside. Early Victorian gave way to the details the later Victorians loved to include in brickwork above doors and windows. There were almshouses on one side of the road next to a park, locked against the dark. Another main road, and after some bleak, surely soon to be demolished buildings, there were cosy bars and restaurants, their names telling me of a local Portuguese community.
The flyer had advertised refreshments with the talk, and I anticipated cups of tea, which I don’t drink, plus a plate of biscuits. What delight then when I arrived at the threatened Victorian library to find wine, red and white! and nibbles. I walked home the same route. The next time, I’m going to do it in daylight.

My tyres were a bit muddy, so I was quite pleased when I saw a shallow puddle I could ride through just before arriving at work. That, it seems, was my mistake. Wet weather, explained my uber-cyclist colleague, is deadly for tyres; all those little bits of glass floating about just waiting for the chance to slice through the unsuspecting rubber.

I drop a kiss on Mother’s head to say goodbye. Today she has not recognised me. I arrived early and walked up the hill from the station. We spent time together. I cleaned, trimmed and filed her nails. She recited The Lord’s My Shepherd with me as I worked. Afterwards, she worked the handcream into her skin, and as the smell of lavender filled the room, lifted her fingers to her nose, inhaling and smiling. After lunch I read to her; the old favourites – Wordsworth’s Daffodils, Masefield’s Sea Fever, Smart’s My Cat Jeoffrey.
I was there for a meeting about her care. At the last minute I called the Alzheimer’s Society, who also help with people like Mother who have vascular dementia. I was lucky; the woman who has been emailing me and speaking to me on the ‘phone since summer was free and happy to attend. I was so glad of her presence and support. 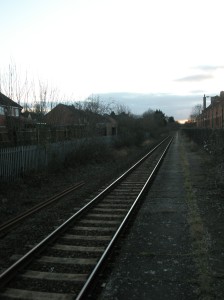