There is something about doing a journey in reverse that makes it feel as if you rewinding a holiday. Would I reach home to find November was just starting? In the event, no, but the reality of here, made there, which had been here the previous day, curiously unreal.

The plane had Christmas decorations, and Heathrow was full of festive decs too, if somewhat low on the festive cheer. After a bit of a battle to get into a lift to the bus station, I pulled on my gloves and zipped up my jacket against the cold of a London that had embraced winter in my absence.

The journey home was uneventful; bus, train, taxi. I lumbered up the stairs to my flat where no one was surprised to see me. The cat/flat sitters had been exchanging texts with me since I landed so were obviously expecting me, but MasterB seemed remarkably unphased by my reentry into his life. He was engrossed in a biscuit game with B, who could have an alternative career training cats.He gave me a nod, rubbed against me and resumed his game. It was a while before I got the nose rub, but it came. I know people who say their cats ignore them when they come home. That has never been my experience. END_OF_DOCUMENT_TOKEN_TO_BE_REPLACED

Late again, and again no photographs, but I have to post tonight as it is my last night in Australia. This time tomorrow I shall be in Singapore. By Tuesday I shall have travelled back to the northern hemisphere and be heading home.

I struggle to believe I am on the opposite side of the globe to London. There have been so many similarities between here and home. It's the differences that catch you. Or at least they catch me. Growing up in a post imperial world, the idea of empire meant little to me. Sometimes there were references, usually ironic, to when the maps were red showing the extent of British Rule. It all seemed a very long time ago. END_OF_DOCUMENT_TOKEN_TO_BE_REPLACED

Above the clouds on the flight back to Melbourne. Already this morning seems a long time ago, packing our bags and receiving a visit from a local cat who dropped by and came into each of our rooms, a welcome chance to stroke soft fur as I am missing MasterB an extraordinary amount and we shan’t be reunited with Billie Dog until this evening. I am guessing the cat visits once its people have set off for work, looking for other appreciative humans.

Our tours of Tasmania’s penal institutions continued with the Female Factory just outside Hobart, and Richmond Jail at Richmond. I’d recommend the first over the second. Both are sobering, but the Female Factory is particularly well done. Time prevented us from joining the guided tour but we overheard snatches of it and it was quite clearly in a different class to the tour we had on the cemetery island at Port Arthur. The scale was also much smaller and the contrast between the accommodation for the superintendent, the matron and the sub-matron was less stark. To be a woman convict, often transported for the most trivial offences, was to find yourself vulnerable to sexual abuse, locked into a vicious cycle where your word would always be doubted if contradicted by anyone in authority. The fact that so many survived and went onto marry, have families and prosper is testament to the human spirit. The site has worked with archaeologists and artists and builds a poignant picture where, belatedly, these women are given the respect that all human beings are due. 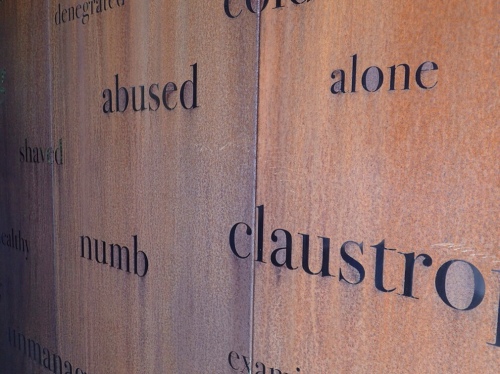 END_OF_DOCUMENT_TOKEN_TO_BE_REPLACED

Today has been fairly quiet. We went out to a farmers’ market this morning, but actually it’s not until next Sunday, so we had a café breakfast and a slow wander down the street to buy fruit and veg in a shop.

Back at the house, a further shopping list was drawn up, and we set off on foot, Billie, the elderly dog leading the way. Vicki had told me Billie was not a cuddlesome dog, but last night she decided I was her new BFF and spent much of the evening with her head in my lap. She was equally attentive as I dressed this morning, commandeering the space between door and bed, so I had to step round and over her to get to anything.

Walking with an elderly dog demands frequent stops, bowls of fresh water, time to gather the muscles and energy to go the next hundred yards. The local shop owners know her, and she knows them. She seemed keen to join us as we chose a bottle of wine for later.

END_OF_DOCUMENT_TOKEN_TO_BE_REPLACED

Having not opted to ay for WiFi during the flight, this post will be published sometime later today. For now, it’s less than two hours until we are due to land, and it am increasingly excited, and even rather emotional about meeting my old friend on her home turf.

This journey began, though I didn’t know it then, twenty years ago when Vicki and I worked alongside each other in overlapping but quite different rôles. We got on, which was just as well as the management wasa shambles, and those of us further down the food chain were taking the flak. At least I had others doing the same work as I was, Vicki was on her own, and she became the scapegoat for many failed and failing management decisions.

The list of tasks for which she was suddenly deemed solely responsible became as long as the London telephone directory. It took its toll. Her husband, initially sympathetic, started to glaze ver when she talked about what was going on at work. She’d come round to mine, and while I made meals, she told Cat her woes. As I’d been telling him mine too, he was well on the way to completing the hours needed to be a counsellor, though I don’t know who his supervisor would have been.

Things got worse and eventually we both quit. I baled first. Vicki headed back to Melbourne telling me I must visit, and me saying yes of course I would.

Time passed. I had increasing responsibility for Mother, and long haul was not on the cards. Cat died. Vicki drank a toast to his memory and mourned him almost as much as I did. Her marriage came to an end. I can’t recall whether it was Mother or her husband who died first, but her parents and sibling also needed support, so our hands were pretty full. END_OF_DOCUMENT_TOKEN_TO_BE_REPLACED

I am quite touched by the concern for my wellbeing expressed in the comments to last night’s post. Thinking about it today, I realise I have not had an extended break from town for a long time. I had planned to go to Crete in November, but that was cancelled and I ended up with my new and lovely kitchen. So I am wondering if my feeling on return to the Smoke was simply a realisation that I need to be away for a while.

After all, I love what London offers. I love the theatre the museums, the diversity. When I am in the country for extended periods I am often appalled by people’s expressed opinions on all manner of things. I live in a liberal (small l) world here in London; in the country I regularly encounter people who not only read the Daily Mail but believe what it says. I shouldn’t last a month.