Another lovely day at das Boot. And not at it. MasterB went back to bed straight after breakfast.

For bed, read under the rug in the fore cabin. I had a couple of things to do at Burwell, filling the car with petrol the most important. So post shower off I went, returning via Reach and picking more blackberries for the crumble that is ready to go in the oven shortly. That’ll be pudding after I have eaten the lentil shepherd’s pie that’s also ready to go in the oven. There’ll be holey spinach as an accompanying vegetable.

I’m getting good at do the washing up in cold water. It’s not that there’s no hot water in the tank, it’s that the taps are sucking in air rather than water when the pump is on, and so they splutter and spit, sometimes sneeze, instead of flow.

END_OF_DOCUMENT_TOKEN_TO_BE_REPLACED

Celia remarked yesterday that the long weeks of relentlessly high temperatures and continuous sunshine seem like a distant dream. She’s right, though it’s still been warm, there is a definite end of summer feel. This evening it’s been raining with a determination which is doubly annoying as I forgot to take something out of the car earlier. Also I closed my windows to keep the rain out and I felt rather too warm, so the sounds of rain fizzling to a stop has been most welcome.

Maybe if it cools down there may still be blackberries when I eventually get to das Boot. I picked lots in NI to have with my breakfast and to add to yoghurt, which was all very geographically appropriate as it is what the Tourist Board likes to call Heaney country.

In the East, I was planning to do my usual afternoon of blackberry picking in Reach and then freeze most of them to enjoy in the winter. END_OF_DOCUMENT_TOKEN_TO_BE_REPLACED

You might think, having been unable to take photographs during the Three Generations Boat Ride as I had not checked that my camera battery was charged, that I might learn from my mistake. But no. Same error different day, different camera.

My cousin Russell and I had agreed to meet up on 25th August for a walk. Initially we were thinking of Dungeness, but it’s a pig to get to by public transport from London (though why I should bad mouth pigs I don’t know; I am pretty fond of them as farm animals as it goes) and equally awkward from where Russell lives in Hampshire.

Rather late in the day, i.e. just before bedtime 24th, we spoke, and R proposed a circular walk from Petersfield. The train journey suited and so it was agreed with R assuring me there was a pub for lunch en route.

Now back in my pre-teen days I did my first ever sponsored walk for Shelter, or possibly Oxfam, between Petersfield and Godalming. I stopped two miles short of the twenty mile goal with feet covered in blisters. I am not sure I have ever returned to Petersfield.

It’s very couth. When you leave the station the first building in front of you is a business catering for equine and country interests. There’s a book swap/exchange in the station. A station which consists of just two platforms but has toilets.

Russell was there to meet me, and the texts we had exchanged when I was on the train suggested he was less confident about the pub, so had double rations with him for our lunch. I had a bottle of water and a small bag of salted popcorn. In Petersfield I added a couple of bananas, three gorgeous apples and a peach to these, but the peach and one of the apples I had eaten before we even got to the starting point. 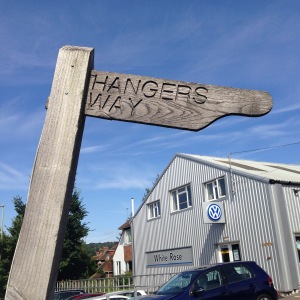 END_OF_DOCUMENT_TOKEN_TO_BE_REPLACED

It's a rule of fruit picking that the best fruit is either too high or protected by nettles and brambles. Still, it's that time of year when the blackberries are ripening and high on my list for this morning was to go a-gathering in Reach. 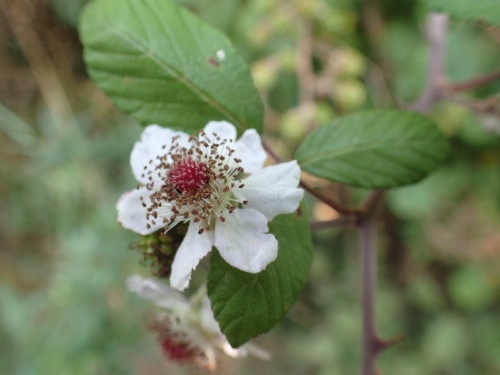 I've written about Reach before. It's a village near das Boot with a perfect pub and a perfect organic farm. Most of my blackberry gathering over the last four summers has taken place there. Not all the berries were ripe. Some were still at the flowering stage, so should I get back within the next month or so there's a good chance I shall get a second crop.

END_OF_DOCUMENT_TOKEN_TO_BE_REPLACED

It all went very well until the lunch stop. The sun shone; the blackberries we intended to gather in the afternoon were abundant; the path was clear. Fab.

Two year ago, Celia and I did this same walk. In my mind at least, it is the Dead Mothers Walk, as for both of us it had been the summer when our mothers died, and this walk was our day away from normal life and its demands.

Roydon Hall, where once the Maharishi held sway, is still for sale, and had very tasty blackberries we could reach through the fence.

END_OF_DOCUMENT_TOKEN_TO_BE_REPLACED

On and off throughout the day I remembered I hadn’t yet brushed my hair. Each time I was nowhere near my hairbrush. I remembered again on my way back to das Boot from blackberry picking and buying tomatoes. My fingernails were stained a gory red, I had blackberry juice stains on my shirt (I still have) and my face was flushed from the sudden return of heat to August. Well you have to let your standards drop so times. No laughing there at the back, you who know me.

Summer’s end of term report this year is unlikely to feature any A*s. There will be comments exhorting her to try harder, remarks about inconsistency and lack of concentration. Maybe she is in love. Certainly for much of the time it has felt as though her attention were elsewhere. We have lurched from cool days and grey skies to scorching heat and back again. Even coming away for this weekend I packed for three seasons.

Being British, the weather is of course a main staple of my conversation, and certainly this summer has not failed to give variety to the theme. But for this weekend she has it right. This morning I rather doubted the forecasters who predicted sunny skies and rising degrees this afternoon, culminating in one full day of heat and sunshine tomorrow before rain on Sunday evening.

In other words, the perfect weekend to be away from London and afloat. No doubt at this very minute some of my near neighbours at home are drinking too much after their barbecues, talking loudly, and preparing to open a few more bottles. Tomorrow will be an amplified version of the same, and tough if you want to get to sleep before the braying laughter and sudden shouts have ceased in the pre dawn. END_OF_DOCUMENT_TOKEN_TO_BE_REPLACED

He’s not the full ninja yet, but it won’t be long.
He was alone all day, shut in the flat, so that must have meant a good lot of sleep. The toys weren’t displaced as they often are, so it seems he didn’t do a lot. No nasty surprises in the litter tray or elsewhere, but he didn’t want to go out. 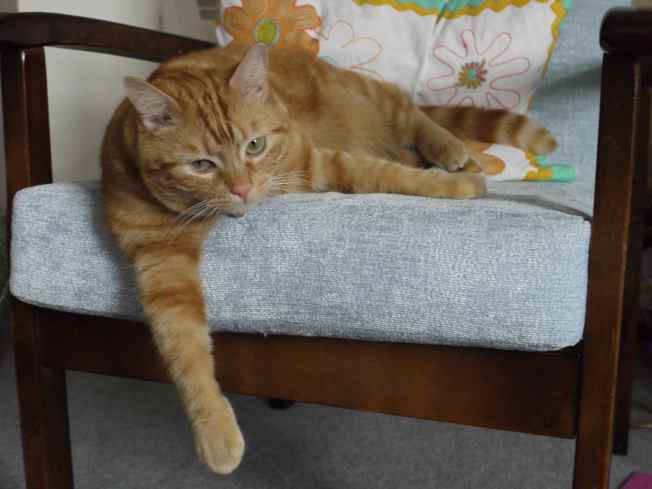