He had a prodigious poo in the garden, right in the middle of the grass, and tried, ineffectually, to cover it with grass. MasterB was hiding in a shrub. Ginger has biffed him a couple of times in the past few days, and although he had approached MasterB with his tail hoisted in the flag of friendship, my boy was taking no chances
I sat on the edge of a flowerbed and watched. I spent around an hour and a half watching, grooming, stroking, this evening. Ginger was friendly but skittish. Sudden movements made him run. I gave him the catnip to play with; stroked his head and experimentally held a clump of his fur on the back of his neck. He stayed calm, but we were yards away from the cat basket. Bluebottles buzzed around the cage. Very unattractive.
It was getting close to seven o’clock. Despite the lack of anti-biotics, Ginger’s face was much less swollen, although I could see a big pink hole just below his mouth. I fished around in the cat basket and found a biscuit. I offered it to Ginger. He leapt on it and ate it. A hungry boy.
I moved back to the basket, fished around some more and oiked all the biscuits I had hopefully put there on Sunday onto the ground. Ginger advanced. So did MasterB. I cuddled MasterB and stroked Ginger.
There would never be a better time.

END_OF_DOCUMENT_TOKEN_TO_BE_REPLACED 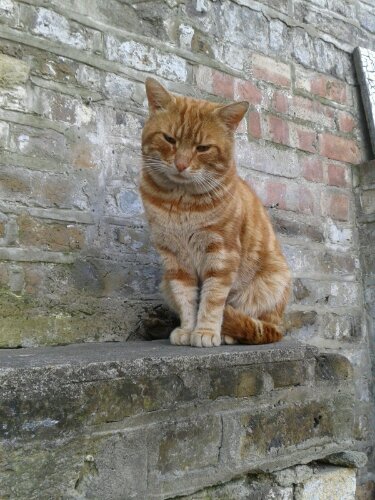 Taken just a few moments ago with my phone.

We had another visit from Ginger today. I know this sounds/is anthropomorphic, but I believe MasterB shares my mixed feelings towards his serious friend. We are both always very pleased to see him, and then almost relieved when he goes.
Today he was hungry. I gave him the remains of MasterB’s meal. Ginger is a member of The Clean Plate Club.

MasterB both wants to be with Ginger and to get away from him. I end up doing a fair amount of chaperoning. Ginger’s main drawback for MasterB is that he still doesn’t understand how to play. MasterB prances after leaves, Ginger’s ears swivel. MasterB does his little play-with-me dance, Ginger stares at him. MasterB chatters excitedly at a crow on top of a chimney that he couldn’t reach in a million years, Ginger sniffs at him. I don’t know if Ginger never had an imagination, or if the school of hard knocks has so dulled it that it may neverappear again. He almost looks like he disapproves of Masterb”s frivolity.
Today Ginger came inside. MasterB was the attraction. Ginger climbed the stairs with surprising confidence. MasterB was round-eyed. Ginger was less sure about coming into the flat, but he followed MasterB and then leapt on him in dominant style. I clapped my hands. Ginger retreated to the doormat. What MasterB made of Ginger being inside I don’t know. Do animals really feel jealousy? Anyway, the two boys spent some time on the stairs. I washed up. Ginger was very interested in the windowsill and sat there for a while.
I got a photo of him looking very sweet.

END_OF_DOCUMENT_TOKEN_TO_BE_REPLACED

He looks very relaxed, and seems to have been well cared for, but this ginger lad was abandoned at the vet’s.
His owners took him there to be neutered, and never collected him.