Hot again. The promised rain did come but just not in the quantities expected, I woke to the welcome sound of it at seven, but by eight it had stopped and the ground was dry. The forecast said it would start again at eleven. It didn’t. I carried on taking books of the shelves and was rewarded by finding I still have my copy of Clive James’ Unreliable Memoirs. Hallelujah!

I’ve started sorting my books into categories with the idea that I may that way decide to streamline them. I am astonished how many copies of plays I have. Mainly Shakespeare, but still. I had a quick flick through some history books to see how well slavery was covered. Badly. Like women’s history it barely gets a page, if that. Yet trade, empire, industrial revolution all get covered. As though these things didn’t happen without the profits in trading slaves and slave labour. L’Oréal (because I’m worth it) claims it does not soil its hands with animal testing, yet it sells its products to China in the full knowledge they will be tested in animals there. That is rather like British history’s attitude to slavery.

I truly hope the BLM movement will lead to a more informed understanding of history. END_OF_DOCUMENT_TOKEN_TO_BE_REPLACED

So from tomorrow we have to wear face masks in shops. Celia and I practised this morning. She successfully tempted me away from the computer to the Barbican Library which has reopened. Glorious.

No so busy at the Barbican

I returned a book I’d borrowed in early March. It all felt very odd, and we were only allowed half an hour. Celia had a pile of books in her arms as I struggled to dredge names and titles from my reluctant memory. When I finally managed to I was out of luck, but I did borrow a reference book so I’ll be back there before long.

In St Giles Church there was a book sale. What a treat. A great selection of books too. For five pounds I got two Len Deighton novels I have read before, and Do Not Say We Have Nothing by Madeleine Thien. 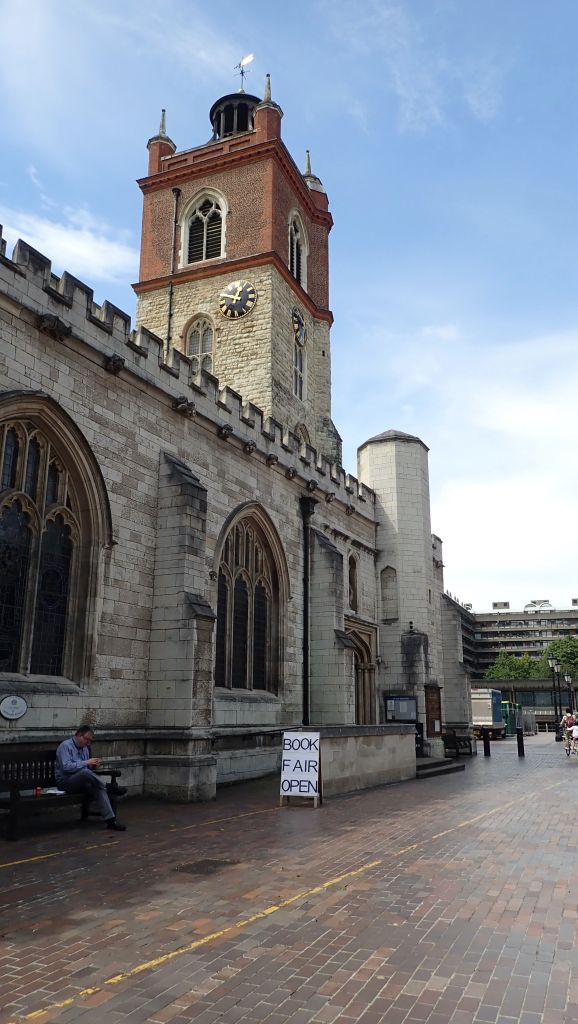 END_OF_DOCUMENT_TOKEN_TO_BE_REPLACED

A few years ago a terrible fire broke out by our old town hall. I happened to be walking down the road at the time, and saw the billowing smoke and the flames leaping from the roof. It was an incident that drew the community together. At a public meeting soon afterwards, the audience made it clear that the town hall, and the library next door were both buildings the community valued. It seemed that our council officers took note, and planned to restore both buildings and keep them as community buildings.

Roll forward to 2016. Sunny Walworth, my home for more than three decades, is part of the extended regeneration zone around the Elephant and Castle. I believe it would be fair to say that the regeneration has not been quite what local people imagined it would be. We started with high hopes for our neighbourhoods, our communities. Gradually these hopes have been repaved by cynicism.

Whose regeneration is this?

It feels like neighbourhoods and communities are being unmade and remoulded, and the remoulding is for people the developers want to attract. This has been a diverse area, and one that has seen little division. Intentionally or not, regeneration has created a them and us scenario.

Increasingly it has felt as though established communities are voiceless. We can look on, but the place we regard as home is being redesigned for others. We are outsiders in our own neighbourhood. END_OF_DOCUMENT_TOKEN_TO_BE_REPLACED

Two nights of poetry in one week, then none for a month. I may have to adjust my social calendar.
Monday was our monthly poetry meeting at the library. For a few fragrant minutes it looked as though it was going to just be two of us – the library assistant and me. Then Sandra, a good egg and an established poet turned up. With her was Fatima. I had never met Fatima before. A curvaceous black woman, she wore candy pink and black. Her eyelashes – surely not natural? – curled luxuriously. She was groomed and perfumed. She came over and kissed me hello. I was enfolded in a pink embrace. I wondered nervously how the evening might progress. She was between me and the door. She eased bare feet out of cosy boots and reached for the selection of poetry Trevor had laid out. Opening one seemingly at random, she read a poem that made us all laugh, then another. Both by Sophie Hannah of whom I had never heard. Now I have borrowed the book from the libary, read most of it and laughed out loud on the bus.

END_OF_DOCUMENT_TOKEN_TO_BE_REPLACED

At our poetry group in the local library there is new member. She is Italian, and speaks English brokenly. She sits and listens attentively to the poems and discussion but beyond some smiles and nods, says little. She is holding a book. One of the group asks her if she wants to read. She tells us it is her story. We look a little blank I suspect. Gradually we understand that it is her autobiography. She agrees to read us part of it, in Italian. She reads rapidly.
I understand odd words, mad, military, afterwards, house, danger, but not enough to make a coherent guess at what she is saying. END_OF_DOCUMENT_TOKEN_TO_BE_REPLACED

John Mackie reminded me yesterday that he had recommended a book for me to read, ‘The Guernsey Literary & Potato Peel Pie and Literary Society’ .

I had completely forgotten about it, so made a note of the title and author, and had a look online at my local library to see if it was in stock.

Success, and given the way our library is being run down, something of a surprise. END_OF_DOCUMENT_TOKEN_TO_BE_REPLACED

As detailed on Bearsy’s page , or Definitely not MyT, for the uninitiated, I had a bit of a rocky start to the day with concerns about my elderly and vulnerable mother taking precedence over everything else. Pow wows on the phone with nearest and dearest to plan our actions next week and exchanging emails that were polite but firm with the staff at the assisted housing scheme where she lives took over the best part of the day.

Then it was time to do the other things that I’d planned. Well, some of them. Obviously something had to give. I decided the dusting and vacuuming could wait. It’s important to get one’s priorities right.

Last night I placed an order with abebooks.co.uk. a friend had recommended them as a good alternative to the ubiquitous Amazon. Abebooks is a group, a large one, of independent booksellers and buying through them helps keep independent book shops going.

I also reserved another book I wanted from my local bookshop. So early in the afternoon I walked over to what would, in the country, be the neighbouring village. But this is London, so what do I call it? District seems so cold. Community? Area? Parish?

It was windy but bright and the walk did me good. Evidence of spring springing all about. I can’t say that I put the issues around my mother’s care out of my mind, but I did start to feel calmer about them.

The bookshop was busy. So instead of collecting and paying for my book I browsed. Mistake. My control over my book habit was evidently weakened and I left the shop with four books having spent nearly £50. Fortunately they didn’t have another book I want to read in stock.  My custom was so appreciated they gave me one of the smart canvas Tote bags they usually charge for. I went home via the library. Safe enough, after I could only borrow there.

Except that they were having a clear out.

I was quite strong. I only borrowed one book and bought another.

Problem now is, where can I put them?