Supper with Octavia tonight for the first time in a while, so some catching up on how the Grey Ninja coped, first with a house full of people at Octavia’s mother’s over Christmas, then the return home to the smells of three Labrador retrievers who had been there in her absence. Fine. She has come a long long way from the cat who needed to urinate over anything and everything to mark her presence and assert her right to be. For which Octavia must take the credit. The best thing you can give an animal is the feeling of safety, to establish trust which then, if you are lucky, leads too love. The Grey Ninja, and her ginger counterpart MasterB, have decided they are safe, they trust they love. Yes, I am blowing my own trumpet too, because I know Himself has confidence in me which I have earned. It’s not that different with humans.

Last week I clicked on an Instagram picture posted by Steve of https://outwardhounds.wordpress.com. It was of Miles, one of The Pack. The photo was in black and white, which was probably a clue. A clue I missed. Miles has died. Like Terry Jones, he has gone to meet his maker and join the choir invisible. I never met Miles, or Terry Jones, although for many years the latter lived not far from me, and I learned this week went to the boy’ grammar school in the town where later I went to the girls’, but I shed a tear for both dog and man. Both have enriched my life. END_OF_DOCUMENT_TOKEN_TO_BE_REPLACED

Next week 20th March it will be eight years since Freddy, aka Cat, aka Freddy the Gorgeous Boy, aka Monkey, died. My lovely boy. Again on the Sunday following the anniversary I shall be remembering him, and all the other animals who have enriched my life, by lighting a candle and raising a glass (or two). There’ll definitely be a toast to MasterB, Freddy’s very worthy successor. MasterB is Freddy’s legacy, and I love him as much as I loved Freddy. I am fortunate. Two cats, two treasures. END_OF_DOCUMENT_TOKEN_TO_BE_REPLACED

It was standing room only by the time we made it inside the crematorium chapel. We arrived quite early, there were just a few of us. Then more and more people began to arrive. There were hugs as we met old friends. So great to see Fred and Albert, who retired some years ago, Kevin, John, Marcio who I still work with regularly. The sun shone. Could it have been a more beautiful day?
But a day that was going to be hard for Paul, Ernie’s partner of nearly 60 years. When you think what attitudes to gay people were like when they met, you have to wonder what they went through. Paul is Irish and Catholic (that maybe was, as the service was led by an Anglican member of the clergy, a woman who knew both of them). Although the Irish Republic is today showing a more enlightened attitude to sexuality, so much so that Graham Norton, probably the Republic’s most famous gay export, has wondered if had the current climate prevailed when he was younger might he have stayed in his home country, traditionally homosexuality has been a particularly big taboo.
It’s weird isn’t it, the way people get so het up about homosexuality. I had a Christian upbringing. The main message was to love one another. I don’t recall sub-clauses about certain sexual orientation meant that edict shouldn’t apply.
Levititcus seems to be the favourite anti-gay quote for some homophobic Christians, but they seem quite able to ignore other instructions from the OT about behaviour. END_OF_DOCUMENT_TOKEN_TO_BE_REPLACED

I spent yesterday with Nephew, his partner and their baby. We walked and talked and ate, cooed over the baby, talked about dogs we’d like to have, cooed over the baby again, talked about love. The usual. Quite a lot of people talk about their pets giving them unconditional love as though that is a rare and wonderful thing. It’s definitely wonderful, but I should hope that the humans getting a pet are also giving unconditional love, and that parents would not have children with the love conditional on their exam results/looks/sporting achievement or whatever.

Among some papers I was sorting last week I found this photograph. 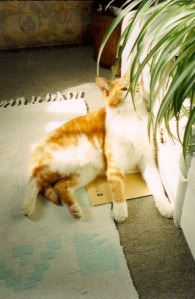 END_OF_DOCUMENT_TOKEN_TO_BE_REPLACED

I don’t know what I expected. Certainly, a dishwasher wasn’t my top priority when I began to think about a new kitchen. Maybe the novelty will wear off, but at the moment I am loving it. Super clean glass jars; MasterB’s Catcher cleaner than it has been since I bought it; gleaming saucepan lids; the rotation of plates, mugs, glasses; the full size cafetière that I hardly ever use these days is living in the dishwasher in the hope that the ingrained coffee stains will lessen and it can be passed onto a charity shop.

Celia came round to help and advise me the first time I used the dishwasher. She was completely au fait with the vocabulary which had left me adrift. I had been to the shop and bought the tablets, the freshener and the rinse aid. How to use them was a mystery.
END_OF_DOCUMENT_TOKEN_TO_BE_REPLACED

I got the news when I woke up; an email to say my father’s elder sister, the last of his siblings, had died in the early hours.

It wasn’t altogether a surprise. My cousin Helen contacted me on Sunday to say her mother was very unwell and receiving palliative care. I don’t yet know the details. At Christmas the news was that she was in great shape and the family was confident she would reach her hundredth birthday in March next year. I was thinking of going to see her. She lived these last dozen years or in Gozo where both her daughters had moved with their husbands.

So it’s a while since I saw her, and she hasn’t been able to write for some time. I am not sure she would have known who I was, but I am sure the connection would still have been there. She was the dearest and loveliest of aunts. I spent many hours in her company. We watched Diana Rigg in the Avengers on Friday evenings, walked her dogs across the common and down by the river.

She had a foray into dog breeding – wire haired Dachshunds, great little dogs with big personalities. Her Saluki, Penny, aka The Duchess, disapproved of their rough and tumble ways and how they would commandeer her bed. END_OF_DOCUMENT_TOKEN_TO_BE_REPLACED

Out all day working – hurrah, some money! – theatre this evening, then a couple of drinks and some chat with a friend, so this post is a bit late. But hey, NaBloPoMo and not that long to go now to the end of the month and mission completed, etc etc.

I lit a candle today for a cat. He belonged to the neighbour who adopted Cat and his brother from the rescue centre. She is again working abroad, and decided the best thing to do was rehome her cat J.

Unfortunately, he did not settle. Always a cat with issues, he was peeing and pooing all around the house; upset and upsetting, A physical exam showed nothing wrong, and eventually his new owner decided to have him put down.

Today was the day he died. I was in Westminster Abbey so I lit a candle for him. There were prayer cards, and a notice that explained that prayers would be said at the shrine of Edward the Confessor for those named on the prayer cards if the details were given in clear print. END_OF_DOCUMENT_TOKEN_TO_BE_REPLACED

Because it’s National Poetry Day. Because I am missing my mum. Because this is a poem she liked to hear and which I have not read once since she died until tonight. And reading it, I feel her hand in mine, hear her breathing, see her face in relaxed concentration, her pleasure, our connection, our shared enjoyment.

When You Are Old

When you are old and grey and full of sleep,
And nodding by the fire, take down this book,
And slowly read, and dream of the soft look
Your eyes had once, and of their shadows deep;

How many loved your moments of glad grace,
And loved your beauty with love false or true,
But one man loved the pilgrim soul in you,
And loved the sorrows of your changing face; END_OF_DOCUMENT_TOKEN_TO_BE_REPLACED

END_OF_DOCUMENT_TOKEN_TO_BE_REPLACED

It is a beautiful evening. The marina is quiet; MasterB is curled up opposite me and purring; birds are trilling, the sun is beginning to set. I am glad of the calm and the sun. Both feel respectful and right.
Mother died this morning. It was early, half past six; the time in days past when she used to get up. The connection here failed and I did not learn of her death for a further two hours. I lost the butter. Somehow between the call and coffee I misplaced it. I found it tonight in a cupboard where it does not belong.
I took my time. MasterB had some shore leave, and then I went to see her. My nephews were already there, but left me for some minutes alone with her. I drew back the closed curtains and let the light in. Mother loved daylight. She opened her curtains at night before she went to bed so that it would fill the room in the morning. For a moment it looked like she was breathing, but she was too flat, too still. I anointed her forehead with lavender oil and kissed her, told her again that I loved her. When the boys came back, it seemed natural to include her in our conversation, lying there as she was between us. Her face was recognisable, but less like herself and more like John Milton’s death mask.
It was time to go, to let the undertakers come and collect her. Once more the boys let me have some time alone with her, just a few moments, another goodbye.