I wrote quite a lot about Billie when I visited Melbourne nearly two years ago. I told my friend Vicki to warn Billie I’d be relying on her for canine comfort as I’d be missing MasterB. She’s not a cuddlesome dog, said Vicki. But in the wayward manner of pets who like to prove their owners wrong, Billie decided immediately I was someone she’d like to cuddle her, and our bond was established. She was elderly then, her gait a bit wobbly, and made me think of a refined lady who’d had a bit too much Sherry but was still game for a knees up. 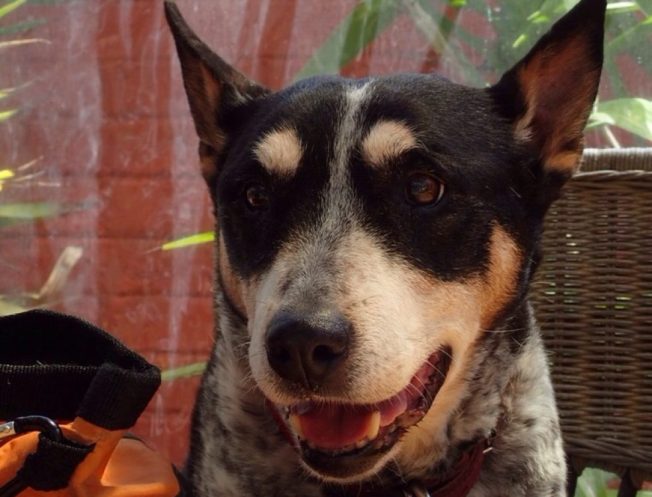 END_OF_DOCUMENT_TOKEN_TO_BE_REPLACED

I'm about two hours away from Sydney, sitting on a train that started off from Melbourne nine and a half hours ago. I thought I'd spend the morning asleep, but I was enjoying watching the changing scenery, so despite the early start – the alarm went off at quarter to six and we went to bed around midnight – I stayed awake. My neighbour for the first couple of hours was a Finn who arrived in Melbourne yesterday. We exchanged a few sentences. Then lapsed into agreeable silence.

My next neighbour companion, who is still with me, had just finished a seven day coach tour. She and her companions are scattered about the train. We smiled and said hello, then to my relief she put on an eye mask, reclined her seat, and prepared for sleep. In contrast, the woman in the seat in front seemed keen to share her family history, the trials and tribulations involved when her dog, a Jack Russell, requires his vaccinations, the exact details of her itinerary.

I was plugged into my iPod when my neighbour awoke, disturbed by the arrival of a new influx of passengers. Despite moaning that she wanted to sleep, she began a conversation with me that continued for nearly two hours. I say conversation, but my rôle was to listen. It was this relentless gentle flow of words that eventually made me close my eyes and sleep. She is also going to Sydney, so we have had more conversation, but I have learned to open my book, and she has also dozed.

I have been amazed by the lush greenery. Currently we are riding through a wooded landscape, the light coming into the carriage filtered through spring leaves. There have been open prairies, railway stations in deserted landscapes, wind farms, cows, sheep, and lots of birds, and a golf course. As we near Sydney so the frequency of houses increases. Leaving Melbourne, riding through the outer suburbs, it was easy to see how older bungalows are being pulled down and replaced by two storey houses.

I've eaten most of the food I brought on board, just one apple left, and I've drunk a fair amount of water. The Tasmania book given to me by Vicki's dad is a quarter read and very good.

Vicki and I said our goodbyes at the station this morning where she nobly accompanied me. I'm not good at goodbyes. I said goodbye to Billie at the house and told her to keep off the sherry. I have become very fond of Billie in the last three weeks. She is a very sweet dog, and I don't think I'm flattering myself when I say she likes me too. END_OF_DOCUMENT_TOKEN_TO_BE_REPLACED

I didn't take my camera with me when we went to the cinema yesterday morning, and as it turned out we continued straight on to Melbourne Museum, so for the first day since I arrived here I took no pictures. Well, that's not quite true. When we got back we found Mel had come round accompanied by Wombat, another neighbour's dog and the only dog Billie seems to feel friendship for. Here are both dogs being hopeful as cheese is cut on the counter. 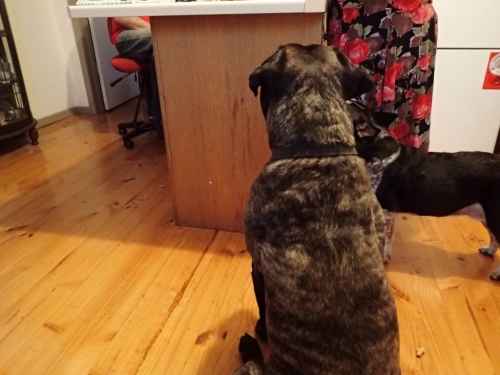 He's her toyboy, being around three years old compared to her sixteen. He's also a lot bigger as he's a bull mastiff. Like other bull mastiffs I've met, he's a gentle giant, fond of leaning against you and soliciting affection.

We broke open the sloe gin Vicki bought in Richmond, and the cocktails were delicious. As lovely as the ones we had in the bar on Sunday. Maybe lovelier. We stopped at two, which was wise. 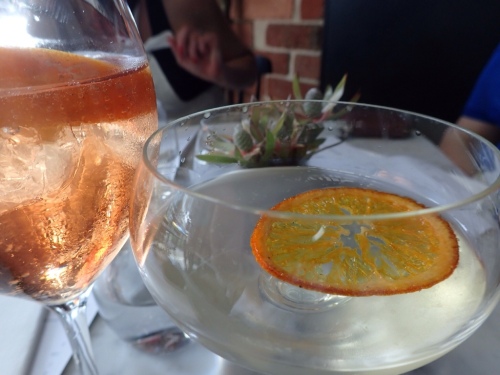 It's a good thing I'm leaving soon as I could get a taste for these. Although Melbourne's tall buildings are impressive, it's the vernacular architecture I like; the streets of low rise houses with tin roofs; lots of bungalows (strange that in the UK the word bungalow is almost a term of abuse, perhaps if they looked more like these they'd have a better press) with flowers and shrubs in the gardens.

END_OF_DOCUMENT_TOKEN_TO_BE_REPLACED

As the number of days I have left before I fly home drops to single figures so the temperature rises. Tomorrow it is expected to be 38c in Melbourne. We're planning a day in an air-conditioned cinema followed by an air-conditioned museum. I thought I might do another trail in Melbourne's arcades this afternoon, but the promise of Martinis at two has persuaded me to put that off. In the meantime I'm enjoying herbal tea at the kitchen table.

Hobarts's gardens were full of colour. I'd have thought that was normal, but we were told last year there was a drought and nothing was growing. People are making the most of the current lushness. 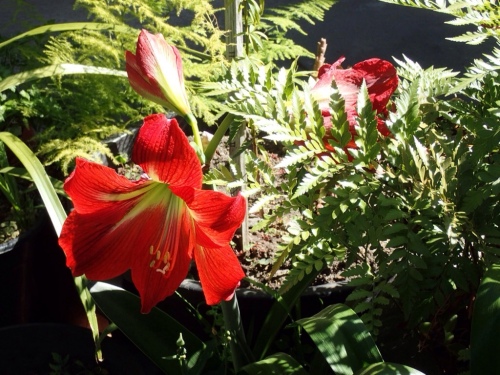 In Seddon, the flowers are also blooming. I am very fond of amaryllis, and this one is in a garden just round the corner.

END_OF_DOCUMENT_TOKEN_TO_BE_REPLACED

I woke early this morning and remembered Trump had won the Presidential election. Further sleep was impossible. The television has been turned on in the room on other side of the wall behind my head, so I guess I am not the only one feeling a horrified fascination with the result.

We got an intimation of how it was going yesterday lunchtime at Federation Square where Vcki and I had headed via a boat that looked remarkably like das Boot, only quite a bit bigger. 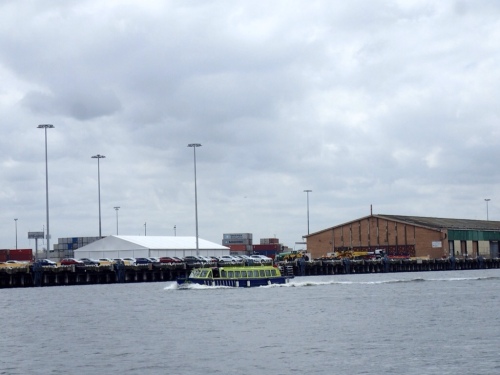 There was a screen at the square, and the subtitles were reporting gains for Trump. We watched, appalled, for a few minutes, hoped it was wrong, and headed off on Trail 7, Victorian Melbourne. We moved swiftly from the big riverside buildings to homes that have been through cycles of varying status.

It maybe an evolutionary safety device to help us hold onto our sanity in the face of the unthinkable that allows us to inhabit several planes of thought at once.

I love the lace decorations on the older houses in Melbourne, and yesterday’s walk was full of them.

END_OF_DOCUMENT_TOKEN_TO_BE_REPLACED

I finally got my tourist trousers on and made it into Central Melbourne on the train and got out at Flinders Street station.

First stop, the tourist info centre at Federation Square, where I loaded up with leaflets including a few self-guided walks.

I’m booked on a guided walk on Friday which I am hoping will fill me in on history and culture in an informative and entertaining way, help me to understand what I am looking at, how to ‘read’ Melbourne.

So today has been more of a wander with frequent stops to take photographs and to sit and watch the world go by. I chose to follow Melbourne Walks #3 On the Waterfront to give my wandering some structure. I had looked at the waterfront from the train and thought I should like to see more, so it was a good choice. All settlements are built by water, so looking at the Yarra was the obvious place to start. Fortunately both Marlon Brando clones and living statues were notably absent.

Art, evidence of prosperity, and homelessness all featured; people lying on the grass in the spring sunshine, other visitors like myself, locals, tents and blankets, people keeping fit. 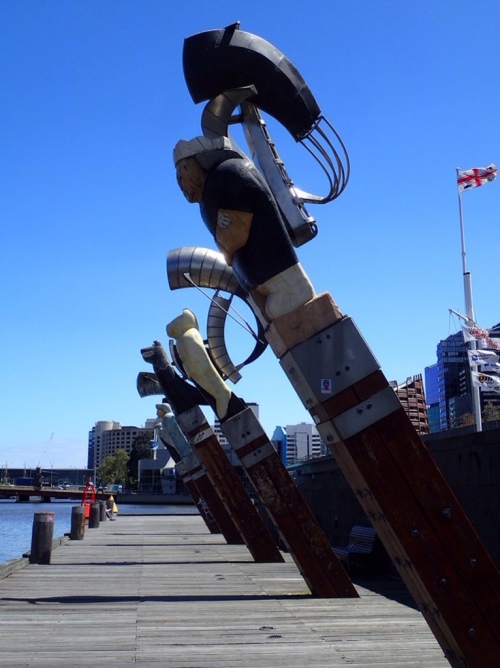 I broke my walk to visit the Immigration Museum. Racial screening made for sober reading, and the presence of several school parties meant some galleries were more or less inaccessible. I’m not complaining – it’s a good excuse to go back, and I hope the short film about why people leave their homes and their countries will sow seeds in the minds of the children who watched it, so they reject the current anti-refugee narrative flourishing in the West.