I don’t want to see Nigel Farage wearing a poppy, or any of the other people who talk about the wars of the twenty-first century for political gain; the jingoism reignited by men who never had to face themselves and find out what it was to lose everything.
We are told to wear our poppies with pride, but sorrow would be more appropriate. Sorrow for the loss of life, for the devastation caused by ideologues to whom the concept of a shared humanity was an anathema.
Farage is an ideologue. He is not the only one. Here in the U.K. and across the world there are people calling themselves patriots who have confused patriotism with nationalism. Nationalism does not understand shared humanity. END_OF_DOCUMENT_TOKEN_TO_BE_REPLACED

East Anglia is celebrated for its poppies in June. But I have never before seen one growing in the water. The poppy season, like the bluebell, primrose and snowdrop seasons, is short, and very beautiful. END_OF_DOCUMENT_TOKEN_TO_BE_REPLACED

Naturally while I was East I had my camera. In fact I had both cameras. I was hopeful that the Crested Grebes would have again built their nest on the port side of das Boot so I wanted my long lens.

However, a moorhen and her chicks moved about the reeds and betwenn the boats close by. For such shy birds, they are very vocal.

The fields were full of poppies. 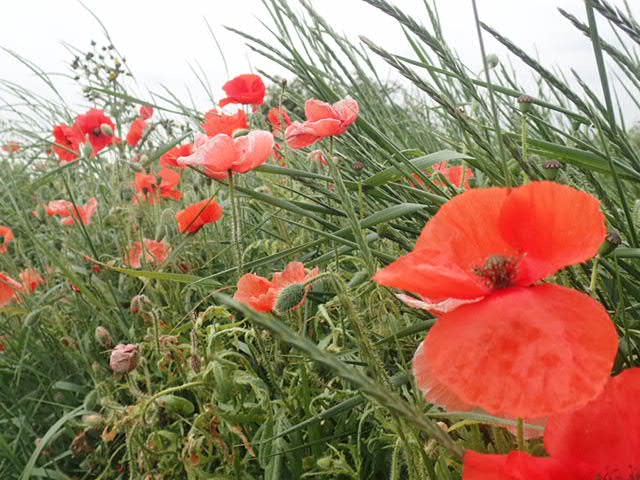 The bees were busy.

The clover was beautiful. 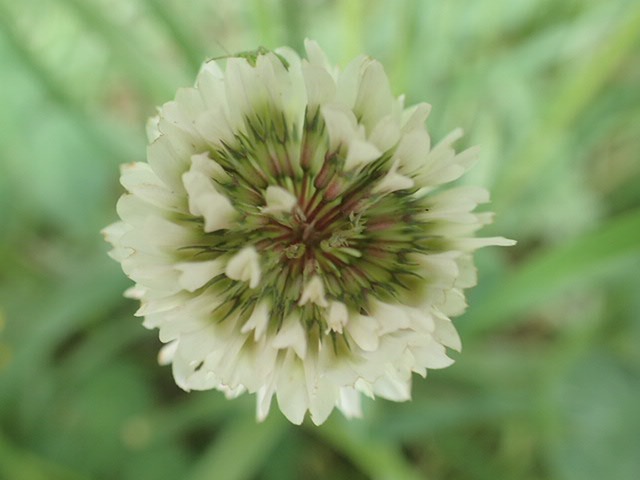 END_OF_DOCUMENT_TOKEN_TO_BE_REPLACED

It was fortunate that I was able to come East yesterday afternoon, as minutes before I left I had a conversation with someone that made me want to modern one of my neighbours. Celia and Octavia can probably guess which one. I may still want to murder her when I get home on Sunday, as my feelings have remained pretty unchanged for over twenty-four hours, but at least there are some miles between us for a while.

If MasterB had not gone back to bed and delayed me, I shouldn’t have had the conversation at all. I am not sure if that is a good or bad thing.

Anyway. I played Van Morrison in an almost endless stream, and got out beyond the slow London traffic to the slow traffic beyond, and practised breathing calmly, and made myself concentrate. In my head I wrote a paean to gardens and how good they are for us. I don’t remember it now, but it comforted me and included the word lyrical, which is one of my highest words of praise.

So maybe there is karma, because when I stopped a mile or so short if the marina at the new egg place, all the dogs came out to greet me, which brought the Egg Lady herself, who explained the eggs were sold, then suddenly remembered she had just collected a few, and if half a dozen would be all right? Which they would. And we chatted, and I gave her my collection of egg boxes from the boot of the car. And drove the last part of the road to das Boot admiring the poppies by the leek fields, the evening sun on the grass, and telling MasterB he was A Good Boy. END_OF_DOCUMENT_TOKEN_TO_BE_REPLACED

Pix at her Tiny Ten wrote yesterday of snow. In Lndon, I haven’t got the heating on yet, apart from the heated towel rail in the bathroom that is. It has been unseasonably mild. I went to dinner tonight at Octavia’s. Her mother, Rae (query spelling), is with her, a hale nonagenarian. While Octavia made a ‘phone call, Rae and I guzzled the good red wine. On the way home a short time ago, I actually felt very warm. I don’t think that was entirely due to the wine. Although this mildness, and the floods elsewhere in Europe, are worrying indications of climate crisis – and if I lived in one of those parts of Britain where floods have become the norm over the last few years, I imagine I would now be on Prozac – I admit I was grateful for the unseasonal warmth today. I spent the afternoon in the moat at the Tower of London as part of the disassembly team of volunteers taking the poppy display apart. An email yesterday warned us to expect Glastonbury conditions. The shift before us gleefully warned us of a mud bath. I can only think they don’t walk on unpaved paths very often. 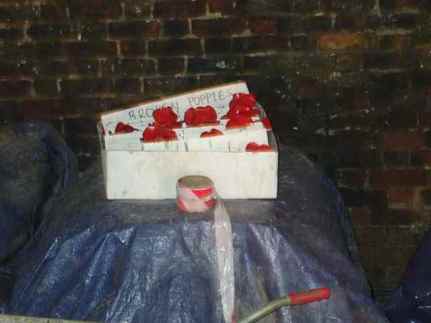 END_OF_DOCUMENT_TOKEN_TO_BE_REPLACED

It’s very late and only my commitment to blogging each day of November has brought me here.

Tomorrow is Remembrance Sunday. There is a new installation in Trafalgar Square which I think is a bit naff. It reminds me of the sort of stuff you get in totalitarian regimes.

The moat at the Tower will probably have thousands of visitors. END_OF_DOCUMENT_TOKEN_TO_BE_REPLACED 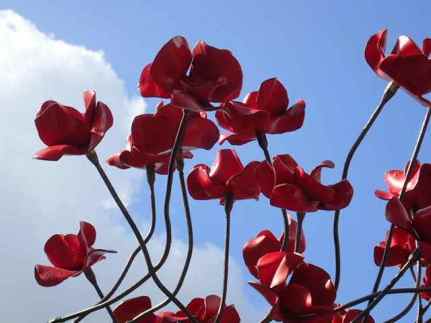 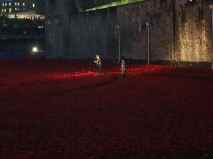 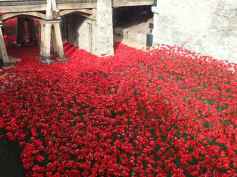 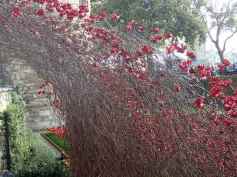 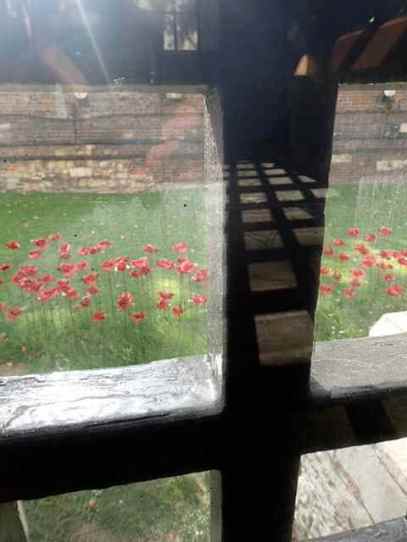 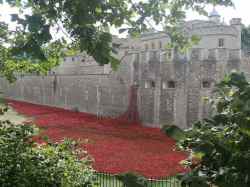 Reading Saturday’s Guardian, I became aware for the first time of a bit of a spat between a Guardian columnist and the Daily Mail. These spats are not particularly unusual; the Mail specialises in splenetic outbursts and is notoriously sensitive to any assaults on anything it identifies as national pride.

So although I have some sympathy with the columnist who found himself accused of sneering at the poppies in the moat, I don’t think he should have been surprised. I didn’t see his original piece, just the response to the Mail’s denunciation. Think popes of middle ages and threats of eternal damnation and you get the picture.

The columnist feels the poppies are essentially saccharine; a comfortable ‘toothless’ display that sweeps the murderous truths of war ‘under a red carpet of artificial flowers’.

Predictably the Mail thinks this disses the dead. The lines are drawn up in drearily familiar style.

Short of banging their heads together in the hope that some of the molecules will be knocked into life and get these two protagonists to see sense, it’s probably best to ignore them. I freely admit I haven’t read the whole of the Mail’s outburst. Reading anything bar the weather in the Mail is something I prefer not to do. As a publication (like Linda Smith, I cannot bring myself to call it a newspaper) it depresses me enormously. That said, the columnist Jonathan Jones doesn’t exactly make me want to watch out for more of his writing. Without the picture by his byline, I could have thought him an adolescent; grimly serious about his views, convinced that these are the correct ones, the rest of us idiots, and quick to condemn others. Rather like the Mail in fact.

END_OF_DOCUMENT_TOKEN_TO_BE_REPLACED

We were supposed to have storms this afternoon. We were expecting thunder, lightning, clattering raindrops. It didn’t happen. a blackish cloud hovered, menaced. We braced ourselves. I was talking to a neighbour who was grimy from DIY. We retreated to the lee of his house. Here it comes we thought. The cloud squeezed a few warm drops that dried as they hit the pavement. That was it. I rather hope it does rain tonight. Streaming torrents from about ten thirty would be nice. Then everything will be beautiful and green and the neighbours will not stay talking in their gardens until two in the morning.

My neighbour Carol, who does not stay talking in her garden, demanded I take more photos of her clematis. She is particularly proud of this purple one. 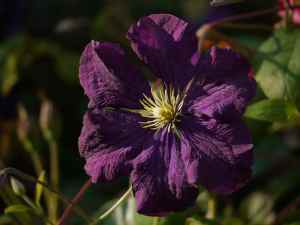 She feels it is overlooked as people notice the pink stripey one which grows in such abundance. 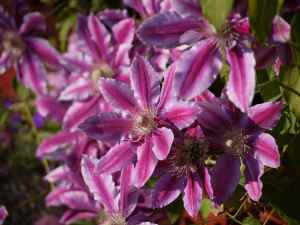 END_OF_DOCUMENT_TOKEN_TO_BE_REPLACED

Remembering the people behind the poppies.

Ian McMillan started it. He was on Desert Island Discs on Sunday, and he chose Stockhausen’s four minutes thirty-three seconds of silence as one of his tracks, though for obvious reasons they couldn’t play the whole thing on Radio 4. But it got me thinking. And listening. So all week, on and off, I’ve been tuning out and tuning in.

Yesterday I was at Westminster Abbey for the opening of The Field of Remembrance. END_OF_DOCUMENT_TOKEN_TO_BE_REPLACED