Back at the South bank for these photos. Who would have thought that deflated balloons could look so wonderful?

END_OF_DOCUMENT_TOKEN_TO_BE_REPLACED

Those wonderful people at the South bank have been at it again. Artists from around the globe have contributed to this summer’s Festival of the World. And the main exhibit is this wonderful, creative, Baobab tree. 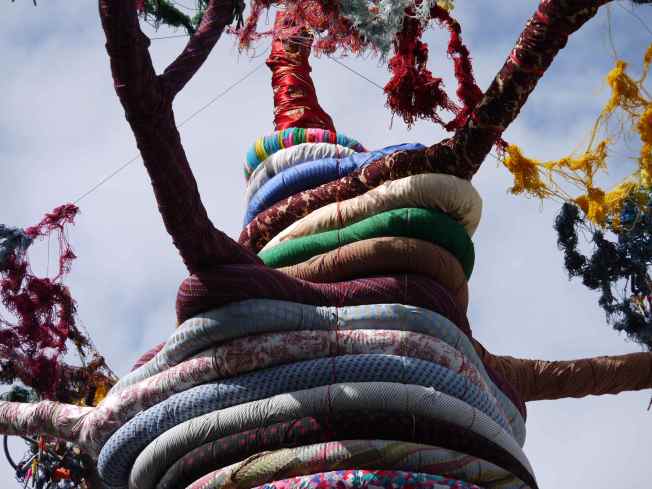 Read about the challenge and see how others have responded to it here.

The traffic was held up by an Orangemen’s march today. It happens every summer. Lots of drums and whistles, and as many union flags as you saw at the Jubilee.

I waited patiently at the bus stop for the traffic to settle. Some middle aged men on Vespas approached. the Vespas had French number plates. After a lull, more Vespas, this time with Italian number plates, then some Belgian ones and some British one. There must be a convention somewhere.

I waited a little less patiently as the wind whipped up and the sky threatened. A stranger approached me and said he did not think the buses were running. It added up. I walked along the Embankment. I was regretting not having a camera with me. A group of cyclists dressed in matching orange lycra were posing for a photograph with the Eye as a back drop.

A swathe of skateboarders came from the direction of Trafalgar Square, weaving round bollards, riding under the Jubilee Bridges. Then they were gone. Several rollerbladers came along the pavement. It seemed that they might be heading to their own event.

On the north side of Waterloo Bridge, a group of young men practised an acrobatic display, using the architecture for props. By the National Theatre the Inside Out season continued. There’s a bar made from props. I took a picture last week. It was built by my friend Jen’s brother. 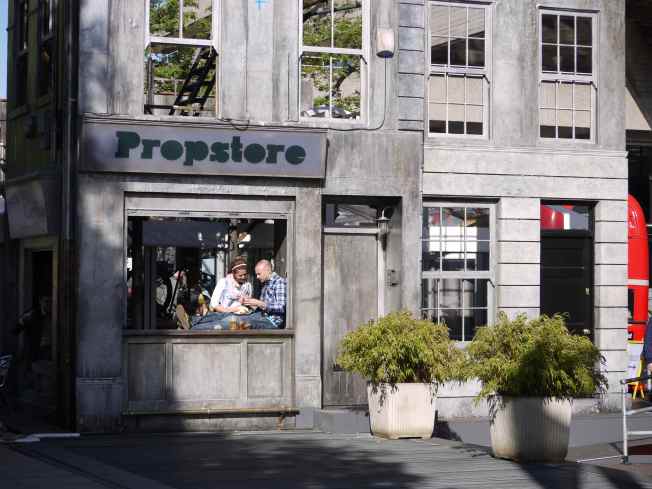 The climbing figures on the hayward Gallery remind me of the puppets in the stage production of War Horse.

And who could resist this cement mixer? END_OF_DOCUMENT_TOKEN_TO_BE_REPLACED

Poor NotCat; the warmest day of the year and he has spent most of it indoors. I don’t yet trust him to be outside alone all day and I was out at work. Then I came home, he enjoyed a cuddle and less than an hour’s freedom before he was confined again, so now he is ninjaing about and I’m outside too, keeping him company.

The rest of London is downing Pimms, white wine and lager like there’s no tomorrow. Not all in the same glass of course. Though there’s no accounting for tastes, so I expect that would be someone’s idea of a nice cocktail.

Every bar we went by was full.
END_OF_DOCUMENT_TOKEN_TO_BE_REPLACED

Funnily enough, elsewhere I joined in with a photo challenge on this vary same word.
It’d be cheating to put the same photo here, though I do like it, so instead, here is a picture I took by the South Bank the other week.

When I’ve caught up on washing and post, I may put up another.

The famous bends of London’s river mean that at a point where you are actually on the east bank of the Thames, you’ll find the South Bank.

Not that it seems to worry anyone.

Geographically inexact, the South Bank Arts Complex and river side walk, is a brilliant, yet undersung, part of the capital, whatever the compass point or season.

Here, sixty years ago people gathered for the Festival of Britain; a concerted effort to cheer a population who had endured the dark days of the Second World War, and the austerity that followed.

My parents went. Married three years and pretty penniless. I imagine my mother, in the first weeks of pregnancy, strolling wide-eyed, seeing a glimpse of this future world where her child, my older sister, would grow up.

Today, even in recession, people on the South Bank look look well fed and well dressed.

They are enjoying a festival to remember that festival of 1951, which was itself a conscious echo of the Great Exhibition of 1851, an event that spawned Expos around the globe. 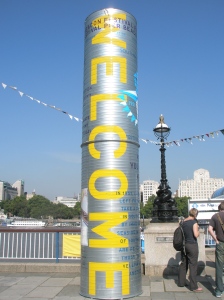 I had a meeting on the South Bank the other morning. Arriving early, I took the opportunity to use my camera.

I’ve been admiring the Urban Fox sculpture for weeks, every time I’ve crossed Waterloo Bridge on the bus.

I think he looks rather sad, but I was amused to see how the pigeons were using him as a roost. END_OF_DOCUMENT_TOKEN_TO_BE_REPLACED 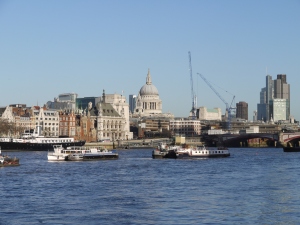 I love walking beside the Thames. A lot of people think it’s dirty, but it’s the cleanest urban river in Europe, and one of the cleanest in the world. I find it quite distressing to see rubbish that people have thoughtlessly cast into it bobbing about. END_OF_DOCUMENT_TOKEN_TO_BE_REPLACED

This picture shows what I love about London. There’s always so much happening, free for any passerby to enjoy.
I was walking up to the Strand and about to cross Waterloo Bridge when I saw the trees in blossom ad decided to take a picture. Only after I had taken it and walked on a few steps did I notice the guys by the ramp practising their circus skills. I took a v short movie of them which maybe I’ll add to this post later.