It’s been a busy week and a productive one. No, I am not talking about Brexit, though a new extension has been granted by the long-suffering EU until October. It sounds a good amount of time, six whole months, but once you subtract the days the house isn’t sitting it’s more like three. Mark Francois has made an arse of himself (again) by making threats to the EU and reading poetry aloud very badly, yet some people think he should lead the Tory party. Hello? Theresa May, whose air miles must be enough to get her to the moon and back by now, returned to the house and made the same speech again. Is it obstinacy, lack of imagination, or a plan to just wear people down? She does an aggressive upward look, reminiscent of Princess Diana, across the floor of the house to anyone who dares contradict her. Whatever the question was, Brexit is not the answer. Tonight, when the news was on, I deliberately left the room to avoid seeing the Farago announcing his new Brexit party with Jacob Rees-Mogg’s sister Annunziata on side as a prospective candidate. Some huge percentage of the adult population says it is suffering from Brexit related stress and anxiety. Tell me about it. I wake up from dreams about it.
Anyway, it’s Friday night and time for a bit of a break, though I fully intend to watch Have I Got News For You at nine o’clock, and I have already listened to the News Quiz. It’s like a itch I can’t help scratching. As though Brexit anxiety wasn’t enough, I have been worried about MasterB for the last couple of days. He has been under the weather, sleeping hugely, not nagging me much to play, taking only a cursory interest in his food. This morning, before I went to work, I rang the vet practice and talked to one of the nurses, describing his symptoms. If she told me to keep a close eye on things once, she told me a dozen times. Being Chief Litter Tray Monitor, I am well versed in MasterB’s bowel movements. Normally his digestive system functions admirably well, just the odd pungent smell from his hind quarters when he is sitting beside me, or the popping sound of wind breaking in tiny bursts. So I was able to say that yesterday’s deposit was less solid than usual. Today’s was even less solid than yesterday’s, so it seems something has upset his tum. I’m hoping he’s on the mend now as he has just led me to the kitchen and had a few mouthfuls of the wet food in his bowl, and his interest in biscuits has definitely returned. So long as it’s nothing serious, a few days of restricted calories might be just what he needs to shift the stubborn superfluous 500g he’s carrying. 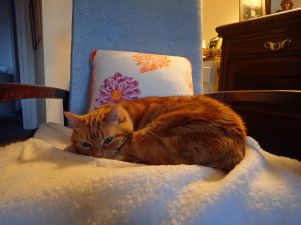 END_OF_DOCUMENT_TOKEN_TO_BE_REPLACED

Last week was pretty stressful, and I hoped that was the worst of it, but today has been up there on the Richter scale as well, at least in parts. So looking at pix of the ginger ninja is a balm to my soul which is feeling a bit battered and bruised, and helps bring a needed smile to my face.
These three are contenders for the calendar. I know which one I like the best, but how about the rest of you? 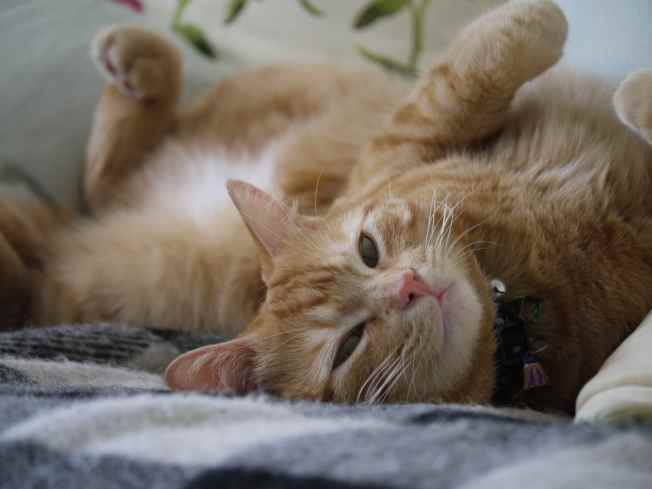 END_OF_DOCUMENT_TOKEN_TO_BE_REPLACED

I am still living with stress at work as nothing has been resolved. I know some thrive on stressful environments. I find them terribly corrosive. My energy levels have plummeted, I am unfocused; lasse is the French word which comes to my mind.

So today, recognising that I was slipping again, I made myself a little list of achievable targets for the afternoon. Nothing grand. A trip to the bank to pay the taxman, a cheque for Mother’s Personal Allowance so she can get her hair and feet done, a few emails, a call to the vet surgery to make an appointment for NotCat’s vaccinations, bake a cake. END_OF_DOCUMENT_TOKEN_TO_BE_REPLACED

Where I am working is very noisy. There are scaffolders on site and a temporary roof. We can hear people in other rooms clearly, but voices across the table disappear.
There is a lt of shouting.
Fortunately, I work there part-time.
But the effect continues. I am snappish and headachy. Today Imcaught a bus to a haircut that I am not too pleased with. A woman was listening to usic through earphones that leaked. A lot. I moved upstairs. I could still hear her, but it wasn’t so bad. The surge of despair I felt on the lower deck when I could not escape her noise was such that I couldn’t ask her to turn it down. Had she been at all resistant, I am not sure what I would have done. END_OF_DOCUMENT_TOKEN_TO_BE_REPLACED

It’s amazing how much better I feel after two days of doing very little.

The news from the hospital is good, though Mother hadn’t been weighed when I spoke to the nurse looking after her, she’s eating well.

“She likes her food, doesn’t she?” said the nurse. “I’ve been looking after her for two days and she’s doing really well.”

It sounds as though Mother is starting to surprise them. She’s been feeding herself, which she normally struggles with in hospital where the plates are never quite at the right height or distance, and the portions are, by her standards, huge.

We left a stack of her favourite little puddings. they don’t have to go in the fridge, so they can be kept handily by her bed. Apparently her curtains are now rather chocolatey.

This ward is happy to mix Complan into cold milk, so we also left packets of the strawberry flavour.

“This is delicious,” she told her nurse.

Her teeth are in, at least the bottom set, so she can have a slightly more varied diet.

The staff love the photo Aunt took in, showing Mum with both dentures in, sitting on the sofa and smiling.

She told her nurse that she loved her this morning, and I get the idea that she’s got her own little fan club going too.

So, I’m sticking to my plans and taking the plane to Belfast in the morning, ready to ruralise at Cousin’s and recover my mojo.

Cousin has her own sadnesses. The little Cairn terrier they adopted in the autumn escaped from the garden and got knocked down on the swift road at the end of the lane. She wasn’t killed outright, but her injuries made it necessary to put her down. END_OF_DOCUMENT_TOKEN_TO_BE_REPLACED

Cat’s death would have hit me hard whenever it happened, but coming so soon after the worry about Mother has been especially hard.

Now Mother has had a fall and has broken her arm. The fall is due to another UTI, which she evidently got before the low level dosage of antibiotics kicked in.

I am hoping she will be discharged tomorrow.

To be honest, I don’t feel fit to drive. I am so very tired, my neck feels as though it has stair rods in it, and there is no Cat to lower my stress. The guest room and Das Boot will both remind me of him, and I’m not sure I can cope with that and help Mother.