It was around supper time last night when I realised the lurgy was leaving me and health once more was returning. Today, if not completely rebooted, my energy levels are up and I’ve cracking through my to do list. So the Walworth falafels are prepared. some are in the freezer, some are cooked and cooling down, ready to go in the car tomorrow when the plan is to head to das Boot. The forecast isn’t all that, but I’ve said no to work at this end of the week, and Older Nephew is able to join me for a day and return my keys.

High up on the to do list is MasterB’s 2019 calendar. It always takes far longer than I anticipate. I’ve made PDFs of two versions so far, but there has been a lot of swapping of photos, and I’ve sent copies to two people for their constructive criticism. A few days break from it will probably be a good thing.

I caught up with Celia this morning and we had a constitutional over to the Old Kent Road so I could recycle my electric blanket at the municipal site. Gentrification has not yet caught up with most of the Old Kent Road, which is the eastern boundary of Sunny Walworth, and it is dominated by large business properties designed more for practicality than aesthetics.

Still, there are gems in between. The Livesey, once a library, then a museum, now a place for children who cannot for one reason or another attend main stream school, is one of them. The Royal London Friendly Society building is another, though at ground floor level it is an ugly display of corporate bookmaking. Neither Celia nor I knew what the RLFS was, but thankfully the internet has enlightened at least one of us. If you want to be similarly enlightened, click here.

There’s a building that has a municipal air which houses a church. There are many churches of various hues along the Old Kent Road. This one has a very fine artwork on the outside giving a pictorial history of the area. the Romans, Chaucer’s pilgrims, Henry V all feature. 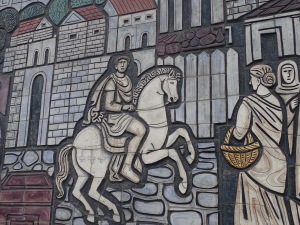 I made a note of the artist, so this will bear further investigation.

We returned westwards, crossing Burgess Park in sunshine. Most schools have gone back now, so the park was quiet. It’s definitely autumn now.